School officials announced in-person learning would resume Monday, though some students are going to be required to stay home for 14 days.
Yuma softball was supposed to host Holyoke on Saturday., and Burlington on Tuesday. The school announced Friday morning the team’s games over the next week have been canceled. The Holyoke doubleheader now will be on September 29, and the Burlington double dip to October 1.
The Indians opened Class 3A District 4 play this past Tuesday with two games at Wray. They dropped both games, but pushed the Eagles to extra innings before losing by one.
Yuma has had a rough go of it since returning to action last Thursday at home against Scottsbluff, Nebraska. The Indians had not played since opening the season August 25 with a sweep of Faith Christian.
Scottsbluff proved plenty formidable, sweeping the Indians, 16-0 and 17-2.
The visitors quickly took control, scoring four runs in the first inning, and five more in the second. The game was called after four innings.
Yuma had three baserunners in the game, and the only hit was a two-out single by Liddy Day in the bottom of the fourth.
Pitcher Sandy Gilliland yielded 16 run on 14 hits and five walks. 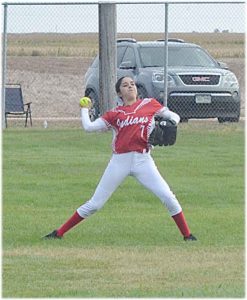 The Indians found a little more success offensively in the nightcap, plating two runs on six hits. However, they trailed 13-0 by the time they scored in the bottom of the third. Kimberly Guerro led off the at-bat with a double to left. She stole third and scored on Darina Rascon’s single to left. They scored again in the fourth when Makenzie Weathers singled, and eventually came home on a bases-loaded walk.
Samantha Wells had two hits, including a double, Day hit a double, Guerro had the double and one run, D. Rascon a single and one RBI, Weathers one hit, and Karina Rascon one RBI. Pitcher Jasmine Sotelo gave up 17 runs on 18 hits and seven walks. She struck out two.
The Indians went to Fort Lupton on Saturday for a doubleheader rescheduled from earlier in the season, when Fort Lupton closed school for two weeks due to COVID-19 cases.
Yuma lost one game 9-2. The Indians scored both of their runs in the first inning. D. Rascon led off with a double and scored o a single, and K. Rascon walked and scored. The Indians left the bases loaded in the second. Fort Lupton scored five in the first, and four in the second.
D. Rascon hit a double and scored one run, K. Rascon a double and one run, Alivia Weathers one hit, Wells one hit and one RBI, and Day one hit and one RBI. Gilliland pitched for Yuma.