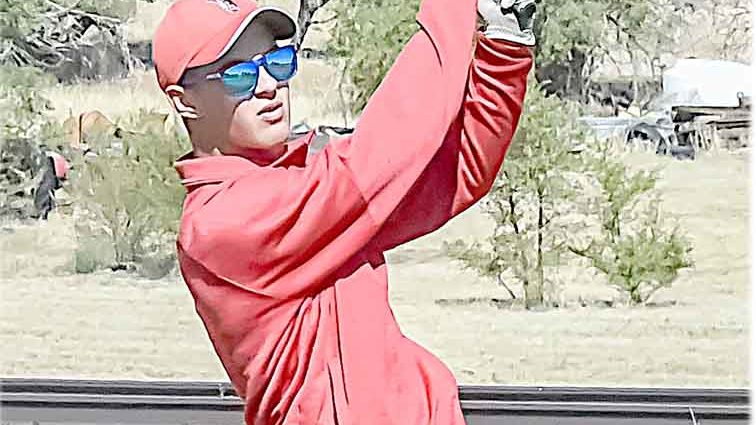 Golfers get to go to regional

The Yuma High School boys golf team will get to send a foursome to the Class 3A Region 3 Tournament at Boomerang Golf Club in Greeley on Monday.
The Indians were unable to compete in the Northeastern League Meet, Thursday in Wray, as the school went to remote learning Thursday and Friday after learning Wednesday afternoon of a positive COVID-19 case within the school.

Contact tracing has been conducted, and those who were cleared and resume playing golf.
Coach Benjamin Weathers said 21 players at regional will qualify for state.
Competing in Region 3 are Akron, Holyoke, Wray, Otis, Stratton/Liberty, Faith Christian, Jefferson Academy, Estes Park, Resurrection Christian, Brush, Eaton, Frontier Academy, Sterling, Strasburg, Berthoud, Severance, and Burlington.
“Our region is very deep so it’s going to take a pretty good score to make it to state, as it should be,” Weathers said. He noted that the four he is taking to regional all have shot a score during the season that would be low enough to qualify. “It’s just can they do it when the pressure is on that day?”
He added that Sterling again will be the favorite to win the regional team title.
The Indians traveled to Fort Morgan last Thursday for a tournament played in chilly conditions. Weathers said it was 44 degrees at tee-time, and it did not get much warmer.
“I’ve been coaching for six seasons now and this is the first time we’ve had to deal with any weather,” he said.
The Indians finished 15th out of 20 teams, with a 296 team score, which Weathers said was the worst of the season. Bryson Castillo and Nash Richardson both shot a 98, Brekyn Josh 100 and Clay Robinson 102.

JV wins Otis tourney
Yuma had the top three scores while winning the team title at the Washington County Invitational in Akron, Monday.
John Smith was top medalist with a career-best 90, while Robinson was second with a 91 and Richardson third with a 92. Andre Baucke shot a 110, Jake Hagemeier 111, Jayden Serl 115, Lars Sims 115, Kyle Schuetz 116 and Fynn Sims 120.