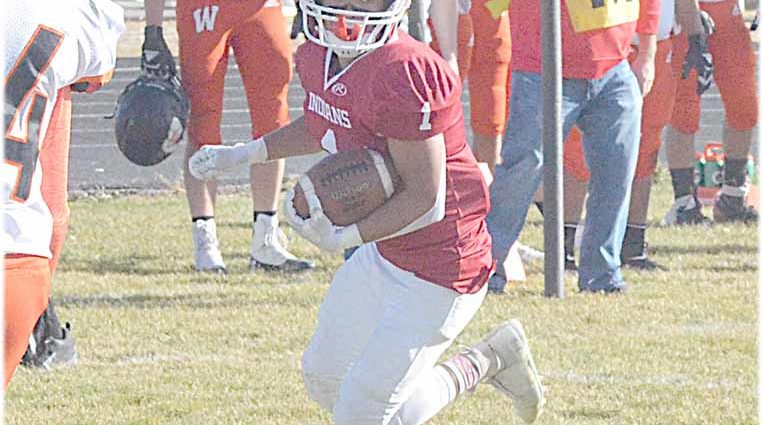 Yuma County Showdown for the Harvest Cup is Friday night

Bring a seat to Wray
Yuma fans fortunate enough to have a ticket to the Harvest Cup showdown between ancient rivals Yuma and Wray will need to bring their own seating.
Wray does not have any bleachers set up on the visitors’ side this season. Fans can bring lawn chairs or blankets, and sit on the flat area on top of the “bowl.” Yuma fans will park in the elementary school parking lot, and follow the path around the east side of the school and enter the facility on the east side of Powell Field. Each team is allowed 175 spectators.
Friday’s game begins at 6 p.m.
The winner will get the Harvest Cup for the next year. Yuma reclaimed the Cup last year with a win in Yuma, the first time the Indians won the county showdown since 2014. Yuma has won the Cup only three times since it was first introduced in 2009.
The Harvest Cup will sit behind the Yuma bench during the game, and will be presented to the winning team at game’s conclusion.

Improving Tribe’s season comes down to annual rivalry game
Yuma High School’s football team enters its big season finale still on the fringe of the postseason.
The Indians also are heading toward actually playing the six opponents that were on their schedule from the start of the season.
The Harvest Cup showdown at ancient rival Wray, Friday night, carries not only local bragging rights — and a chance for the Indians to keep hold of the Cup for a second straight year — it also carries serious playoff implications.

However, Yuma came right back with a scoring drive capped by Robinson’s 15-yard TD pass to Kevin Hermosillo for a 49-8 lead.
Wiggins scored in the final minute to account for the final score.
Robinson ran for 180 yards and a four touchdowns, but the offense showed a little diversity with the pass as well. Robinson completed four of five attempts for 81 yards and two touchdowns, accounting for 261 total yards. Blanco had three receptions for 66 yards and a touchdown, and Hermosillo one catch for 15 yards and a TD.
Yahir Trejo ran for 33 yards on 13 carries, Ethan Goeglein 23 yards and a TD on eight carries, Nash Richardson one carry for 10 yards, Cristian Duarte one carry for six yards and Blanco one for four yards.
Defensively, Kail Cooper, who left the game in the second half with an arm injury, was in on eight tackles, Lane Remmich six, Eduardo Corral five, Trejo five, Lars Sims four, Will Marshall three, Damon Thornton three, Louden Blach (who also left with an injury in the second half) three, Christian Quezada three, Victor Perez three, Robinson two, Hermosillo two, Joey Ross two, Ethan Gonzales two, and Rigo Muela, Kallen Blach, Joan Yanez, Blanco, Juan Cortes, and Trey Stegman one each.
Thornton had an interception.
Yuma went a second straight game without committing a turnover.