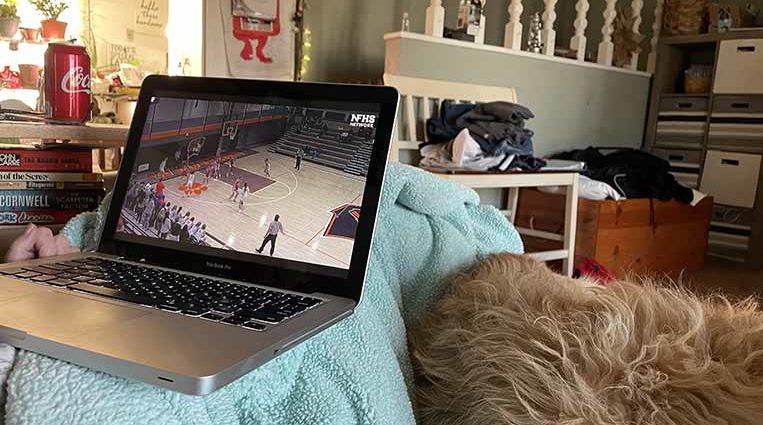 Apparently, the Yuma High School girls basketball team just likes having all the attention.
With all other YHS sports — boys basketball and girls and boys wrestling — on hold this weekend, the Indians enjoyed their first winning streak of the shortened 2021 Season B, building on Friday’s home win over Peyton with a 63-55 league win at Wiggins, Saturday afternoon. They are 3-4 in the LPAA, and 4-8 overall.

They will wrap up the regular season later this week, hosting rival Wray on Friday in the final league and home game, then go to Kersey on Saturday to take on Class 3A Platte Valley. Both are formidable opponents, but the Indians somehow will have to find a way to win both to have any kind of chance, however slim, of reaching the 24-team postseason.
For now, though, the players, coaches and fans are enjoying their finest back-to-back performances of the season. Less than 24 hours after knocking off Peyton in The Pit, the Indians were in Wiggins for a league game, the only one of the day as the remainder of the boys regular season has been canceled due to COVID-19.
The Indians played solid from start to finish in the Tigers’ gym, dominating the last four minutes of the game to pull away for the victory.
It was nip-and-tuck up until that point, however. Neither team led by more than three in the first quarter. Yuma opened the second on an 8-0 run for a 20-15 lead, pushed it to 24-17, and withstood a 5-0 Wiggins spurt for a 28-24 halftime lead.
Wiggins opened the third on a 10-2 run, but Ema Richardson scored Yuma’s next 12 points for a 42-39 lead. The teams were tied at 44 entering the fourth.
The Tigers led 50-49 when Yuma scored 11 straight. Elle Roth had a 3-pointer in the run, and also had a nice dish to Richardson as the Indians opened up a 10-point lead with under 2 minutes left.
The Pioneer does not have the official statistics yet, but unofficially Richardson had 36 points and Roth 11. Hailey Eyring provided a big boost off the bench, scoring six points in the process, Caddis Robinson four, and Taylor Law and Meidi Reyes two each.