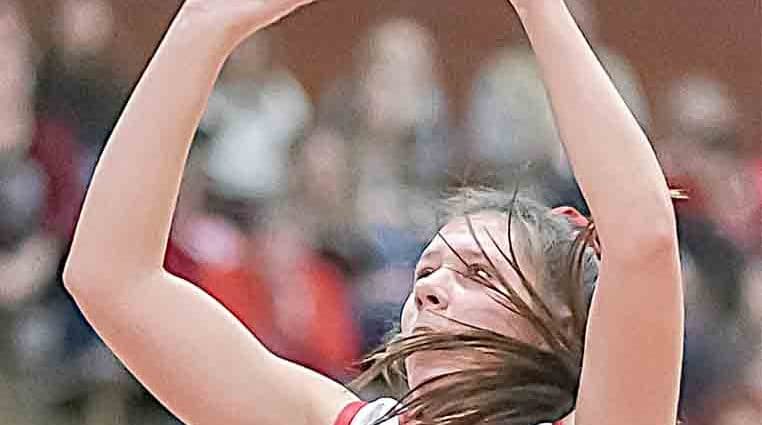 Yuma girls have another challenge Saturday

Yuma High School’s girls basketball team has another challenging game this weekend.
The Indians have a Lower Platte Activities Association game at Merino, Saturday afternoon. The Rams are in Class 1A, and thus will drop down for the postseason, but enter this week 3-1 in LPAA play, 9-3 overall, second behind Holyoke, 4-0, 13-1, in the league race.

Merino has a chance to win the league title, as it did in volleyball, as the Rams are at Holyoke on Friday before hosting Yuma, and play at Wray next weekend. They are ranked No. 10 in the 1A Top 10, and are No. 15 in the 1A RPI.

Yuma entered this week 6-7 overall, 3-2 in league play, after splitting last weekend’s games — losing at Holyoke on Friday, then beating Sedgwick County handily last Saturday afternoon in The Pit. The Indians had a challenging non-league game at Imperial, Nebraska, against the Chase County Longhorns, this past Tuesday, suffering a 49-27 loss to drop to 6-8 overall.
They no longer are ranked in the 2A Top 10, but are receiving votes, and were No. 24 in the 2A RPI as of earlier this week. The Indians do boast wins over Simla, No. 7 in the RPI, and Sedgwick County, No. 19 with a 9-5 overall record.
Holyoke is enjoying its best season in years, sitting at No. 3 in the RPI and the 2A Top 10, with the inside track at winning the LPAA regular season title,particularly if the Dragons can beat Merino on Friday.
They certainly flexed their muscles against the Indians, last Friday in Holyoke, handing the Tribe a 52-31 loss. It was the Dragons’ first win over Yuma in several years.
The Indians actually had an 8-6 lead midway through the first quarter. However, Holyoke closed the quarter on a 13-0 run, and extended it to a 20-0 run in the first two minutes of the second for a 26-8 lead. The Dragons pushed their lead to 32-13 midway through the quarter when Yuma coach Bob Rahm called a timeout.
It was 38-20 at halftime. Yuma never could cut into the deficit in the second half, scoring a total of 11 points.
The Indians shot 32 percent, and were outrebounded 32-22.
Ema Richardson led Yuma with 18 points, and had two rebounds. Reagan Nolin had four points and three assists, Lainey Mekelburg four points and four rebounds, Elle Roth three points and five rebounds, Lea Richardson two points, four rebounds and four steals, Samantha Wells three rebounds and two assists, Meidi Reyes two rebounds, and Taylor Law one rebound.
Yuma rebounded nicely the next afternoon with a strong showing in The Pit, beating Sedgwick County 54-39 and getting a leg up on the Cougars for third place among the LPAA’s six 2A schools.
Nolin scored five straight early in the first as the Indians opened up a 10-3 lead. They pushed it to 14-3 early in the second quarter before Sedgwick County rallied to get within four, 15-11.
However, the Indians kept their composure, and Nolin’s 3-pointer, followed a short time later by Mekelburg scoring, pushed Yuma’s lead to 26-13. The Indians led 30-15 at halftime.
And this was against a Sedgwick County team that had seriously pushed Holyoke one week earlier.
The Cougars stuck around in the second half, getting as close at eight, 32-24, and then cutting it to seven, 42-35, early in the fourth.
However, Reyes converted an and-one, and Nolin swished a bucket in the middle of the lane as the Indians pushed their lead to 49-36 with under 3 minutes left.
The teams combined for only five 3-pointers out of 27 attempts, but Yuma shot 44 percent on 2-pointers, and made nine of 12 at the charity stripe. The Cougars were able to get to the line 26 times, making 13. Yuma held a convincing rebounding advantage, 35-22.
E. Richardson had 18 points and nine rebounds, Nolin 14 points and three rebounds, L. Richardson, a freshman, had 12 points and four rebounds, Reyes five points, five rebounds and four assists, Roth two points and nine rebounds, Mekelburg three points and one rebounds, Law two rebounds and one assist, Kelly Gardner and Wells one rebound each.