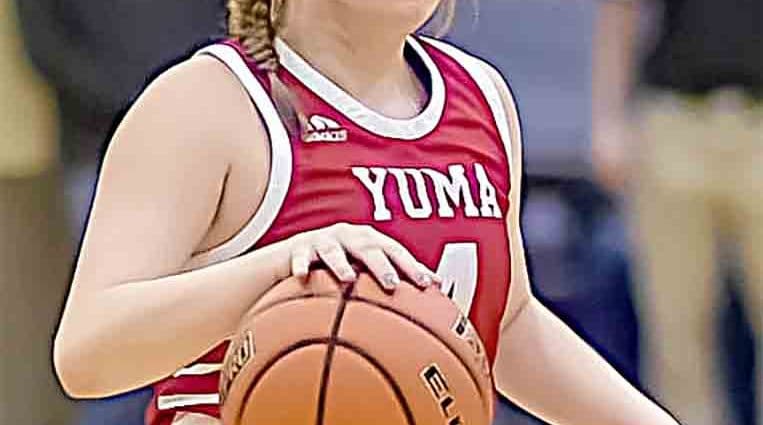 Yuma High School’s girls basketball team has a key weekend coming up.
“This is a huge week for us,” head coach Bob Rahm said. “One team is ahead of us and one is tied with us.”

The former is Holyoke, while the latter is Sedgwick County.
Yuma will be at Holyoke on Friday to take on the Dragons. Holyoke is tied with Class 1A Merino at the top of the Lower Platte Activities Association standings with a 3-0 league mark, 11-1 overall. Sedgwick County and Yuma are next, both 2-1 in league play.
The Dragons’ only loss to date is to top-ranked Limon. Holyoke is No. 3 in the 2A Rating Percentage Index, as of Thursday. The Dragons are ranked No. 3 in the 2A Top 10. Yuma, 5-6 overall, entered this week 27th in the RPI, while Sedgwick County, 7-4 overall, is 18th.
Game time at Holyoke will be approximately 5:30 p.m.

The Indians then will host Sedgwick County on Saturday, at approximately 2:30 p.m. The Cougars pushed Holyoke last week before eventually losing by 12. (Wray is 1-1 in league after losing to Holyoke recently.)
Yuma also goes to Imperial, Nebraska, on Tuesday to take on a tough Chase County Longhorns squad.
Yuma hosted Wiggins last Friday for a LPAA contest, prevailing 48-38.
The Indians ran out to an 11-0 lead, but Wiggins kept sticking around. The Tigers got within four, 13-9 early in the second quarter before Yuma went on an 8-0 run. The Indians made a basket right before the buzzer for a 29-17 halftime lead.
The Tribe could not pull away in the third, seeing its lead trimmed to nine, 34-25 heading into the fourth. The Tigers got even closer in the final quarter, but the Indians iced the game at the free-throw line.
They finished game making 17 of 26 (65 percent) at the charity stripe, led by Taylor Law making eight of 10.
Reagan Nolin led in scoring with 15 points, to go along with four rebounds, two assists and two steals. Besides her shooting at the free-throw line, Law also made two of three behind the 3-point arc, finishing with 14 points, five rebounds and three steals. Kelly Gardner had six points and two rebounds, Meidi Reyes six points, six rebounds, two steals and two assists, Elle Roth three points, 11 rebounds and two assists, Lainey Mekelburg two points and 11 rebounds, and Sam Wells two points, six rebounds and two assists.
The Indians traveled north to Sidney, Nebraska, on Saturday, suffering a 51-21 loss. They struggled all game with the Red Raider’s press. The turnovers were not terribly high, 19, but the Indians had trouble getting good looks due to Sidney’s height and strength, and also were dominated in rebounds. Yuma shot 26 percent.
Nolin had 10 points and four rebounds, Roth four points and four rebounds, Wells four pooints and four rebounds, Law two points and three rebounds, and Mekelburg one point, two rebounds and three steals.
“We have a lot of youth, and the varsity level is a little faster,” Rahm said. “They’re still learning and getting better. Hopefully by the end we can get on a hot streak. We have the talent.”