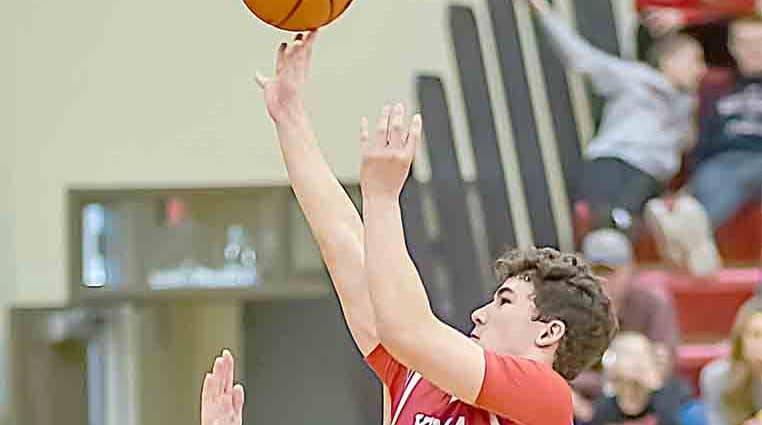 Yuma boys: League title could hang in the balance

The Lower Platte Activities Association’s regular season championship might be decided Saturday afternoon in The Pit.
Yuma will be hosting Sedgwick County for the matinee. Both entered this week 3-0 in LPAA play, with Yuma 10-1 overall and the Cougars 11-0.
However, both have league games before meeting up Saturday. The Indians are at Holyoke on Friday to take on a Dragons’ squad that has struggled to a 2-10 record, 1-2 in league, but can always be dangerous.

Sedgwick County is at Class 1A Merino on Friday. The Rams are 0-1 in league, but 7-3 overall.
Yuma is N0. 9 in the 2A Rating Percentage Index, as of Thursday, and No. 2 in the 2A Top 10. Sedgwick County is No. 5 in the RPI as of Thursday and No. 9 in the Top 10 poll. Holyoke is 46th in the RPI.
The Indians also have a challenging non-league game against Chase County at Imperial, Nebraska, on Tuesday.
They won both of their games last weekend, but found themselves trailing in each before eventually prevailing.
First up was a league game in The Pit against Wiggins, Friday night. Yuma won 53-38, but not before experiencing some anxious moments.
The Indians trailed early, but went on a 10-2 run to lead 16-10 early in the second quarter. Wiggins ran off six straight to it, Yuma regained a 24-18 lead, but back came Wiggins to take a 25-24 advantage before Yuma scored right before the halftime buzzer for a 26-25 lead.

A ragged third quarter saw the Indians fall behind 30-28, but a Rolando Caraveo trey sparked a 7-0 tun to end the quarter. They then scored the first four points in the fourth, and Jonathan Rascon’s triple gave the Tribe a 48-36 lead with 3 minutes. The Indians then held on from there.
The Indians shot just 38 percent (19-for-50), but Wiggins was even colder at 32.6 percent. Yuma held a 34-29 rebounding advantage.
Chase McCreath had a double-double with 14 points and 12 rebounds, along with three assists and two blocks. Clay Robinson had 14 points, nine rebounds, and two steals, Rascon nine points and four rebounds, Caraveo nine points and four steals, Javier Gamboa four points and four rebounds, Cade Morton two points, two rebounds and two blocks, Preston Blach one point and one rebound, and Creighton Eyring one rebound.
The Indians traveled north to Sidney, Nebraska on Saturday, eventually winning 50-43.
It was not looking good early, however, as the Red Raiders opened up a 17-6 lead early in the second quarter.
Robinson then started taking the ball to the hole, which seemed to open up the Yuma offense. The Indians scored the last 10 points to trail just 17-16 at halftime.
Robinson opned the third with back-to-back old-fashioned three-point plays to push Yuma’s run to 16-0 and a 26-17 lead.
Sidney finally scored after being shutout for more than eight minutes of game time, which got the Red Raiders going again. They got as close as four, but Yuma led 33-26 after three.
What ensued was an entertaining fourth. Yuma’s lead ranged from six to two points. A Sidney 3-pointer tied the game at 40. However, McCreath then scored from close, and Morton followed with a key 3-pointer for a 45-40 lead.
A wild scramble for a loose ball eventually resulted in Caraveo being fouled as he made a lay-up. He also made the free throw for a 50-42 Yuma lead with 43 seconds left, effectively sealing the victory for the Tribe.
Robinson finished with 21 points, four rebounds and three steals, McCrreath 10 points, four rebounds, three assists and two steals, Morton hit two 3-pointers at critical junctures for six points, Caraveo five points and two steals, Gamboa four points and a rebound, Rascon four points, two rebounds and two steals, and Eyring three rebounds.