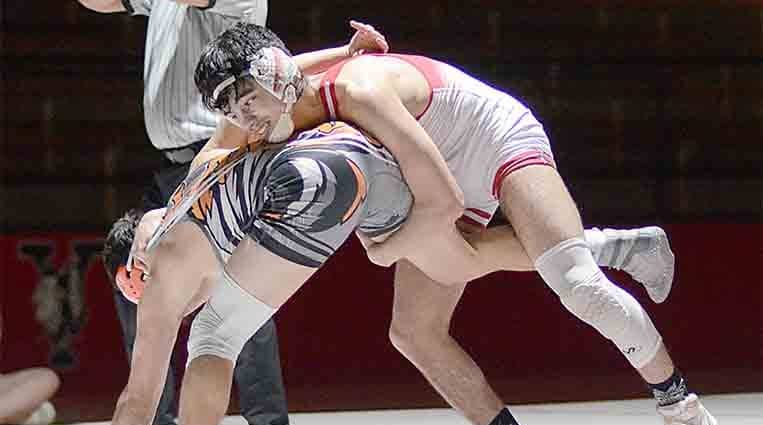 Yuma-Wray dual in The Pit

Yuma High School’s wrestlers definitely have been challenged as they near the end of the regular season.
After two tough duals in The Pit last week, followed by competing against bigger schools at the Northglenn tournament on Saturday, the Indians now host the annual Yuma County Showdown on the Mat.

Rival Wray, which has won two straight 2A state titles with an eye on a third next month, will be in town for what should be a fun night of wrestling in The Pit. It will begin at 5 p.m. with junior high matches, followed by the high schoolers taking the mat.
“We are looking forward to wrestling some of the best wrestlers in 2A in The Pit,” coach Rory Lynch said. “We have been working very hard and we are healthy right now, I expect us to wrestle competitively.”

The Indians then close out the regular season Saturday at the Stratton Invitational.
Lynch acknowledged wins were tough to come by last week, but said the wrestlers need tough matches in order to improve. He added he was pleased with the effort.
Yuma hosted a triangular with Lamar and County Line, last Thursday night. The Indians first wrestled Lamar. Yuma had only two wins on the mat, as Lamar won the dual 55-14. Braden Smith opened the dual with a 5-3 decision over Sergio Mendoza at 126 pounds. John Smith got the other win on the mat, earning a pin late in his 113-pound match against DeShawn Martinez. Cayden Lynch picked up a forfeit win at 182.Blaze Brophy lost by decision at 132, Jesus Sanchez by fall at 138, Joey Ross by fall at 145, Yahir Trejo by decision at 152, Louden Blach by fall at 160, Jose Ruiz by major decision at 195, Lars Sims by fall at 285, and Alec Holtorf by a close decision at 128. Yuma forfeited at 170, 220 and 106.
Lamar and County Line then wrestled, Lamar winning again, followed by the Indians taking on County Line. The Indians won the dual 44-30.
Trejo earned Yuma’s first points on the mat with an exciting 5-4 decision over Angel Soto Delgado at 152. Blach won 6-0 over Cade Zordel at 160. Ruiz earned a 10-7 decision at 195. Smith won by fall (1:22) over Ty Michael at 113. Holtorf won by technical fall (17-2) over Brenden Reifschneider at 120. Brophy won by fall (1:14) over Tate Krentz at 132. Sanchez got a forfeit win at 138, as did Maci Daugherty at 106. Ross lost by fall at 145, Lynch by fall at 182, and Brandon Mendoza by fall at 285.
“Lamar was tough, but we need tough matches to get better,” coach Lynch said. “The County Line was a better dual regarding wins, and some of our matches were challenging wins. We are looking to wrestle against teams that make us better, and Lamar and County Line made us better.”
The Indians went to Northglenn on Saturday, finishing 12th in the 24-school field with 72.5 points. Jefferson won the team title with 169.5 points. Lyons was the only 2A school to finish ahead of the Tribe, placing ninth with 77 points.
Yuma had a few placers, with fourth place being the highest. That went to Brophy at 132. He went 3-2 with two falls and a technical fall, and both of his losses came against the same wrestler from Longmont, and both were close decisions.
Holtorf went 3-2 while placing fifth at 120. He won his fifth-place match in sudden victory after losing his previous match by one point, missing out on a chance to wrestle for third.
Smith went 3-2 and placed fifth at 126. He had two wins by fall.
Lynch grabbed fifth place at 182. He went 2-2, both wins by fall, his wins coming in the quarterfinals and the fifth-place match.
Smith won four of five matches at 113, but the results did not have a placing for him. Trejo had two wins at 152, Ross one win at 145, and Blach wrestled at 160, Ruiz at 195, and Sims at 285.
“We would always like to win more matches but we weren’t disappointed with our effort,” coach Lynch said. “We go to Northglenn to get matches with 3A, 4A, and 5A kids, looking to compete with these bigger schools. That’s one of the ways we get better.”