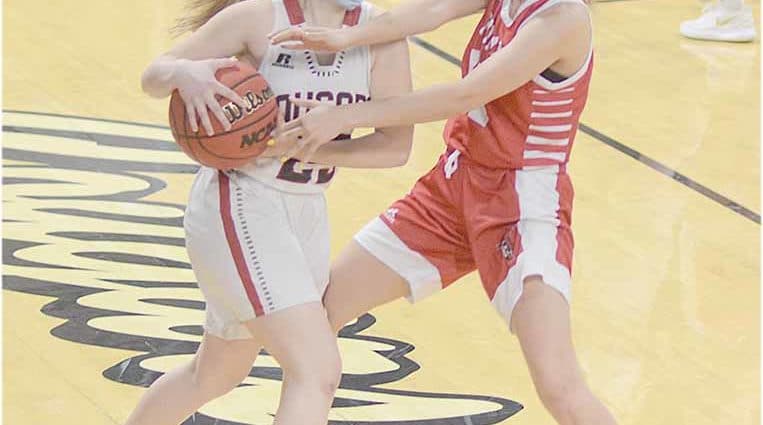 It has been a tough shortened Season B for the Yuma High School girls basketball team, but expect the Indians to keep battling.
The Indians are 2-8 overall, 2-3 in Lower Platte Activities Association play, after splitting two games late last week.

“We’re still going to go at it,” head coach Jeremy Robinson said. “I’m not quitting. We’re still going to work on stuff, keep at it.”
The Indians host the Peyton Panthers on Friday in a non-league game. Peyton entered this week with a 5-4 record, sitting at No. 20 in the Class 2A Rating Percentage Index, and received eight votes in the Top 15 poll.
“They’re tough and I am pretty sure it is going to be a tough battle for us,” Robinson said.
The Indians then return to league play Saturday when they travel to Wiggins. The Tigers

entered this week 3-6 overall, 0-4 in league play, but Robinson noted they still will present a tough challenge for the Indians.
He said the team has not watched much film this season, the Indians were going to earlier this week. “I’m going to use it as a little teaching moment for myself, to try to understand what they’re thinking at certain points in a game.”
Scoring has been the biggest problem this season for the Indians.
However, they had a decent run of it last Thursday in a 45-43 home win over Akron, picking up their second league win.
Lea Richardson’s free throws with less than 8 seconds left held up as the winning points in a game that was close from start to finish.
Yuma’s 23-17 advantage late in the second quarter as the biggest lead for either team in the first half.
Taylor Law’s basket off a nice pass from Caddis Robinson gave the Indians a 31-24 lead late in the third. However, Akron bracketed the end of the third and start of the fourth with back-to-back 3-pointers, pulling to within 31-30.
Seven straight points by Elle Roth helped the Indians build a 39-32 lead with about 5 minutes left, but the Rams kept battling back, finally tying the score with a free throw with 13 seconds left.
That set up Richardson’s final heroics as she was fouled trying to get to the basket. She calmly knocked down both for the winning points.
Yuma shot just 28 percent, including making three of 17 from behind the arc. The Indians made 15 of 24 at the charity stripe.
Roth had nine points and 10 rebounds, Richardson nine points and four rebounds, Taylor Law six points, Samantha Wells six points and six rebounds, Robinson five points and one assist, Meidi Reyes four points, Ema Richardson four points and five rebounds, and Emma Rayl three points and one rebound.
While the shooting percentage wasn’t that great, the Indians were able to spread around the scoring.
“That’s why we won against Akron, (eight) kids scored,” Robinson said. “That’s a well-rounded scoring balance.”
The Indians were on the road Saturday afternoon for a non-league game at Burlington, losing 52-32.
The game eventually got away from the Indians as they shot just 17 percent, including missing all 11 3-point attempts, and making just nine of 21 free throws.
Despite that, they were in it for most of the game.
Strong defense leading to turnovers and good takes to the basket led to a 10-0 Yuma runthat tied the game at 13 midway through the second quarter.
However, Burlington closed the quarter on a 9-2 run, leaving the Indians behind 22-15 at halftime. They stuck around for most of the third, but Burlington eventually took a 12-point lead, then scored the first five points of the fourth for a 36-19 lead. The Indians never got closer than 13 the rest of the way.
“I thought at Burlington we did a good job defensively, but you have to score to get into it,” Robinson said.
L. Richardson had 15 points and eight rebounds, E. Richardson five points and six rebounds, Caddis Robinson four points and six rebounds, Roth two points, eight rebounds and two assists, Reyes three points, Hailey Eyring two points and two steals, Law three rebounds, and Wells three rebounds.