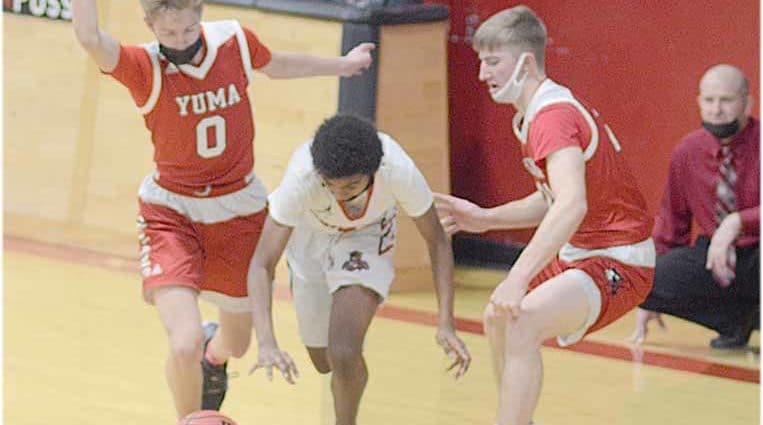 Yuma boys have big one in The Pit

A big showdown is scheduled for inside The Pit, Friday night.
Yuma High School’s boys basketball team will be hosting Peyton in the final game of the evening in a major non-league tilt.

The Indians have won seven straight, 7-3 overall, 5-0 in league play, entering this week ranked No. 5 in the Class 2A Top 15 poll, and are No. 7 in the Rating Percentage Index. Peyton is 7-1 overall, sitting at No. 2 in the RPI, and No. 3 in the Top 15.
“It will be huge,” Yuma coach Dave Sheffield said. “It will be our biggest test since we started this.”

He said Peyton has strong guard play matched with a 6-foot-4 post player, and are efficient shooting 2-pointers.
“They’re going to want to have a slower pace, while we’ll want to go the other way,” Sheffield said. “It will be a clash of styles a little bit.”
The Indians have another tough test Saturday when they travel to Wiggins for a Lower Platte Activities Association game. The Tigers are 6-3 overall, but only 1-3 in league play. They are No. 13 in the Top 15 and the RPI. Sheffield warned they have the ability to make things difficult for the Tribe.
“I think they’re a scary team,” he said. “They’re definitely athletic and can do some things.”
At least the team finally gets to have a nice stretch of practices this week, having Monday through Thursday to hit the gym. Practice time has been scarce in this shortened Season B, a fact made even more acute in that the Indians completely switched their attack after opening the season 0-3.
“You want more practice than games this season,” Sheffield said. “Usually you want to have more games than practice this time of year, but not this season.”
The Indians knocked down 14 three-pointers twice last week, against Haxtun and Akron, and also scored 61 points in the first half against Akron, during which they made 10 treys. All might be program records, though it has not been confirmed.
“They’re playing pretty free,” Sheffield said of his players.
The offense slowed a bit, at least early, in last Saturday’s 65-25 non-league win at Burlington.
The Indians missed several good shots in the first quarter, but still led 16-7.
They completely took control in the second, reeling off 13 straight points.
The defense was salty, allowing only two points in the second quarter, and two more in the first 5 minutes, 30 seconds of the third.
By then they led 52-11, including a 19-0 run. Burlington suddenly got hot with three straight treys, but never got closer than 33 points.
Yuma shot just 35 percent, including making just four of 18 from behind arc. However, the Indians were solid at the charity stripe, making 21 of 30 (70 percent). Defensively theycame up with 22 steals.
Robinson had 12 points and six steals, Morton eight points and two steals, Gamboa eight points and four steals, Duran eight points and two steals, Carrillo eight points, Ross six points and three steals, Rutledge five points and three steals, Tate five points, Remmich four points and Kobe Rayl one point.
“Our defense was great, but we just couldn’t score (early),” Sheffield said.