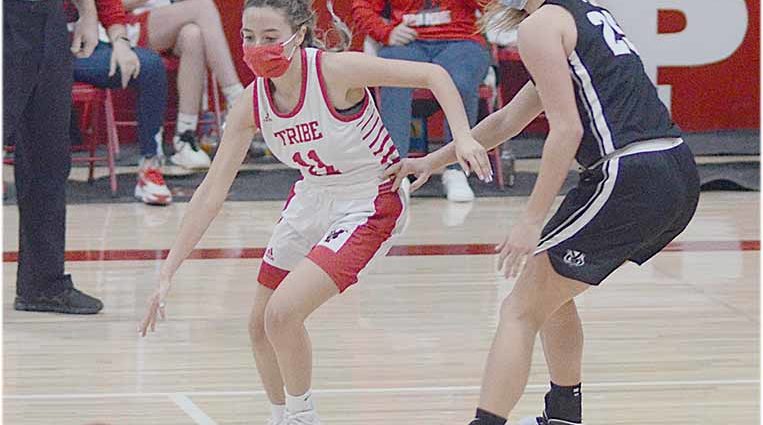 Yuma High School’s girls basketball team showed great improvement from its first game to the second, but the challenges keep coming for the Indians.

They entered this week 0-2 after opening the shortened 2021 season with a 61-37 loss at Brush last Thursday, followed by a more-encouraging 42-35 loss to Class 2A second-ranked Limon, last Saturday in their home opener in The Pit.
“I was super proud of them against Limon,” first-year head coach Jeremy Robinson said. “We had a good practice on Friday and they responded on Saturday.”
The Indians had another tough game this past Tuesday in Imperial, Nebraska, against the Chase County Longhorns, losing 45-13 to drop to 0-3 on the season.

They now open Lower Platte Activities Association play at home Friday against Holyoke, then go to Julesburg on Saturday for another league game against the Sedgwick County Cougars.
Holyoke entered this week with a 3-0 record. The Dragons are only No. 16 in the Rating Percentage Index due to its weak early schedule, but are ranked No. 3 in the CHSAANow.com 2A Top 15. (Limon dropped from No. 2 to No. 4 in this week’s poll.
Sedgwick County entered the week 2-0, sitting at 24th in the RPI, and ranked No. 12 in the Top 15.
Yuma is in unchartered territory in regards to the RPI, sitting at No. 51 in 2A, out of 66 teams, as of earlierthis week. However, the Indians still are in the Top 15 poll at No. 14.
“That’s a huge league game (against Holyoke), then we turn around with (Sedgwick County),” Robinson said. “We can’t catch our breath, and it’s not because of the masks, it’s because of our schedule.”
The coach said the Indians cannot wait too long in the shortened 14-game regular season to start picking up wins, but added that the Indians are making strides.
“I learn new stuff about them every game,” Robinson said. “We’ll figure it out. We have to use games as teaching moments.”