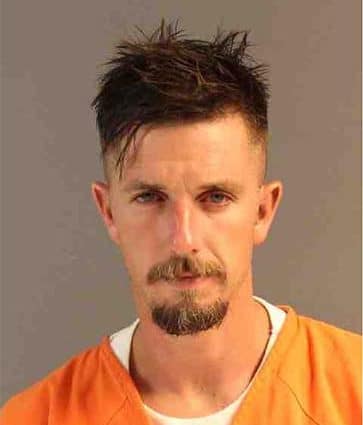 A Yuma County man is back in jail after leading law enforcement on a short chase in a stolen pickup, last week.
Jacob Henderson was booked into Yuma County Jail on numerous charges, last Tuesday afternoon.
According to the Yuma County Sheriff’s Office, it attempted to contact a pickup in Wray that had been reported stolen earlier in the day from the Yuma area.

The pickup failed to stop and led the deputies on a pursuit that ended at County Road 46 and County Road T, where the stolen vehicle was pinned by a patrol pickup. The pickup then broke loose and rammed the patrol pickup, causing the vehicles to become entangled.
A total of 27 new charges have been filed against Henderson, including eight felony counts.
He previously was arrested August 15, 2020, again after attempting to evade law enforcement. That pursuit ended up in a standing field of corn, where the suspect vehicle got stuck. Henderson eventually came out of the field and surrendered.
Sheriff Todd Combs said many people have been asking why Henderson was out of jail.
“Mr. Henderson was able to make bail, which is set by the Court system under the law,” Combs told the Pioneer in an email. “The bail amount is usually set by a schedule set in a range amount by state statute. Bail insures that an individual will show up to court to stand trial for what he is accused of. It in no way is an admission of guilt. He will now face the same situation again with a bail set higher, at this time, then he did last time. Bail can be modified or reduced by the court from the original set amount. Yuma County Sheriff’s Office does not have a say in the bail amount.”
The August arrest occurred as the YCSO was investigating a theft that occurred on County Road E near Yuma. A civilian spotted a black Lincoln Navigator that matched the suspect vehicle description.
Henderson was charged then with driving vehicle when license revoked as a habitual offender, third degree criminal trespass – agricultural land, theft – less than $50, and an out of county warrant arrest.
The YCSO announced a few days later that further investigation tied Henderson as the suspect in several other burglaries that had occurred in Yuma County, and several cases remained under investigation.
The additional charges included second degree burglary – theft of a controlled substance, a felony, theft $750 or more but less than $2,000, and third degree criminal trespass.
Henderson’s bond was increased to $57,000 at that time.
He was free on bond when last week’s incident occurred.
It was not clear earlier this week if a bond had been set for Henderson following last week’s event.