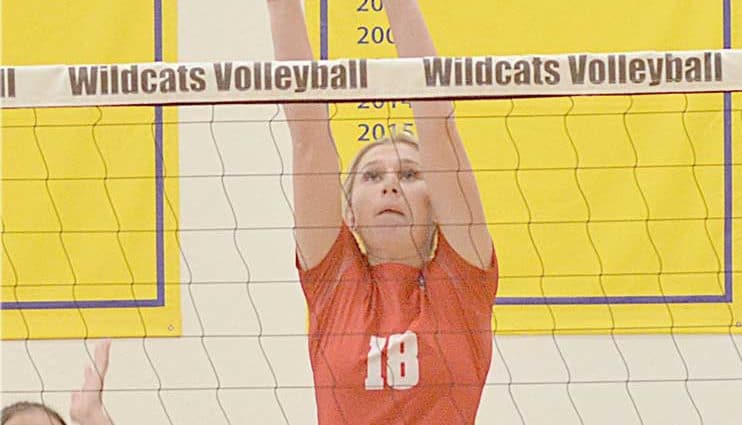 After a mostly-encouraging start, the Yuma High School volleyball team has several days to prepare for its Lower Platte Activities Association opener.
It will be a tough one, too, as the fifth-ranked Indians (Class 2A CHSAANow.com Top 10) take on second-ranked Sedgwick County, Wednesday at Revere School in Ovid.
Yuma is 2-1 after opening the 2021 season last Saturday in the Kit Carson Tournament, beating the host school and Akron, while losing to 2A top-ranked Wiggins, which lost to 1A second-ranked Fleming in the championship match.

“We wrote down a few things to work on. We’ll practice those scenarios so we’re better prepared for them,” head coach Jenny Noble said. “Sometimes we quit in transition, quit taking the extra step defensively, quit blocking. It’s stuff that we can fix.”
Saturday was the Tribe’s best start over the past couple of seasons.
“This is the first time in awhile since we’ve had a winning record,” Noble noted.
The Sedgwick County match has been moved around a couple of times, first to work around the state fair. It was moved again earlier this week to a Wednesday due to the lack of officials.

Everything went as scheduled last Saturday, with the Tribe opening tourney play against the Kit Carson Wildcats, currently ranked No. 6 in 1A.
The Tribe enjoyed a solid start, winning in four sets, 25-17, 17-25, 25-18, 25-22.
Yuma trailed 9-6 in the first set, but then went on a run for an 18-11 lead. Kit Carson cut the margin to four, but the Tribe ran off four straight for a 24-16 lead to set up the win.
However, the Indians came out flat in the second set, and Kit Carson took advantage to race out to a 13-3 lead. Yuma battled back to get within 19-15, but Kit Carson ran off five straight to seal the win. The Indians regained its composure in the third set, leading by as much as eight points on their way to a 25-18 win. Elle Roth served up 11 straight points in the fourth set as the Indians eventually led 20-9. However, Kit Carson battled back to within two, 24-22, before the Indians pulled out the win.
Elle Roth led the net attack with 18 kills, while Meidi Reyes had 13, Mia Dischner, Alejandra Barron and Lea Richardson three each, and Kinley Eyring two. Richards recorded 33 setting assists. Yuma was 97.8 percent at the service line. Roth was 23-23 with three aces, Reyes 19-20 with four aces, Barron 13-13 with two aces, Richardson 11-11 with two aces, Eyring 12-13 with one ace, and Dischner 11-11 with one ace. Roth and Emma Rayl led in digs with 18 each, and both led the way in serve receive.
The Indians then ran into defending state champion Wiggins. The Tigers immediately jumped out to a 9-1 lead, going on to sweep the Tribe, 25-15, 25-20, 25-18.
However, after the slow start, the Indians competed fairly well with Wiggins, keeping the next two sets close until the Tigers pulled away at the end.
“We might have been a little outgunned,” Noble said. However, she later noted she is looking forward to how the Indians compete against Wiggins when the teams meet in a league match in October.
There was not much for stats in the match. Roth had nine kills, Reyes four and Dischner three. Richardson had 16 assists. Yuma served only 87.3 percent. Dischner was 12-12 with two aces, Barron 8-8 with one ace, Richardson 7-7, Reyes 6-7 with one ace, Eyring 7-8, and Roth 5-0 with two aces.
As the second-place team in their pool, the Indians closed out the day against Akron, which finished second in its pool.
It ended up being an up-and-down five set affair, with Yuma finally pulling it out, 26-24, 25-22, 16-25, 22-25 and 15-12.
The Indians rallied from a 17-13 deficit in the first set, but was one point away from a loss when they scored three straight for the extra-point win. They led most of the way in the second set while winning by three.
However, nothing much went right over the next two sets. They fell behind 11-3 in the third set and never recovered. An 3-0 lead in the fourth turned into an 11-4 deficit. Yuma finally started playing better again later in the set, pulling to within 23-22, but Akron got the win to force a fifth set.
That one remained tight throughout, with Akron leading 12-11 before Yuma scored the last four points to pull out the victory.

“We were not very sharp, but we got out of there with a win, so I’ll take it,” Noble said. “We did come back and win the fifth set after losing the previous two, which is hard to do, so I’ll give them credit for that, but we made it harder on ourselves than we had to.
Reyes was 22-22 serving with three aces, Richardson 16-16, Dischner 16-17 with four aces, Eyring 13-15 with one ace, Roth 15-19 with three aces, Barron (who injured her ankle during the match) was 7-8, and Jailyn Mekelburg 5-5 with one ace. Rayl, Roth and Richardson led in serve receive with solid efforts, and Rayl and Roth led in digs with 27 and 20, respectively, with no errors. Roth knocked down 23 kills, Reyes 16, Dischner 11, Eyring three and Barron three. Richardson recorded 46 setting assists, and Eyring eight.
Yuma played without sophomore Caddis Robinson, who was out with an injury.