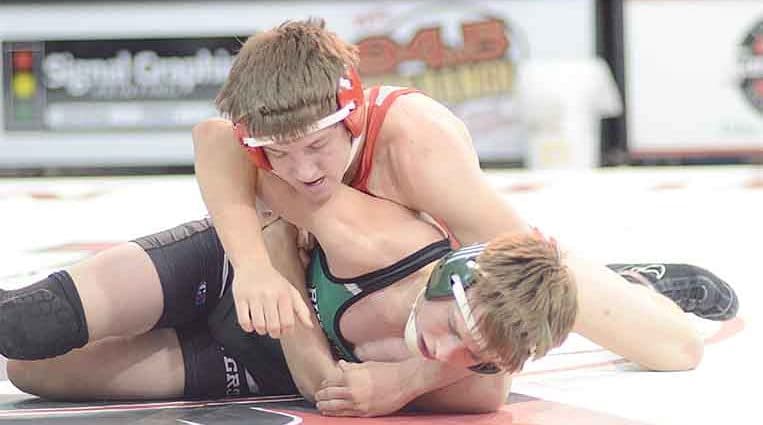 The Indians finished third in the final team standings, after finishing second last year, and again qualified eight for the Class 2A State Tournament, Thursday through Saturday at the Pepsi Center in Denver.
Wray won the team title again with 274 points, while Highland had 245, Yuma 162, Sedgwick County/Fleming 123.5, and Wiggins 95 to round out the top five in the 16-school field.

All 11 Yuma wrestlers placed in the top six of their respective weight classes, nine in the top five and eight in the top four. Yuma had one second place, four third placers and three fourths.
The Indians got off to a good start Friday. Braden Smith and Yahir Trejo were the only ones with a first-round match, Smith getting a pin of Wiggins’ Austin Allen in 1 minute at 126, and Trejo winning by fall (3:37) over Platte Canyon’s Joshua Ebbs at 152.
Yuma then won nine of 11 quarterfinal matches — John Smith beat Tyler Frank of Merino 8-1 at 113; Alec Holtorf won a 6-0 decision against Burlington’s Matakeasji Rodriguez at 120; B. Smith won by fall (2:58) over Limon’s Kellen Kappel at 126; Blaze Brophy took a 7-0 decision over Wray’s Dillon Schmidt at 132; Jesus Sanchez won by fall (1:06) over Sedgwick County/Fleming’s Josh Lockwood at 138; Joey Ross won by fall (2:44) over Clear Creek’s Michael Hillman at 145; Trejo got a 13-4 major decision against Sedgwick County/Fleming’s Bryan Bagby at 152; Cayden Lynch won by fall (3:06) over Platte Canyon’s Jakob Ebbs at 182, and; Lars Sims won by fall in 29 seconds against Highland’s Jadon Frost at 285. The two losses came at 160, where Louden Blach was pinned by Wiggins’ Pepper Rusher, and at 195, where Jose Ruiz lost an 8-4 decision to Highland’s Clayton Wood.
It was Saturday morning’s semifinals that proved to be the Indians’ undoing in the team race. The way the seeding went, Yuma wrestlers were paired up with a Wray opponent in six of the semifinals. The Indians won only one of those matches, and also dropped three other semifinals against opponents from other schools.
Sims was the one Yuma grappler to get a win, pinning Wray’s Ali Hedri in 31 seconds, advancing to the 285-pound championship match later in the day.
Lynch lost a heartbreaker to Wray’s Ty Hardesty in the 182 semifinal. The Yuma wrestler led most of the match, but Hardesty got a reversal right at the end to tie it. However, after the referee conferred at the scorer’s table, Hardesty also was awarded two back points to claim the win.
B. Smith also barely lost, dropping an 8-7 decision to Hayden Burr of SCF at 126. Brophy fell by just two points, 3-1, to Highland’s Lucas Hefner at 132. Holtorf had a good battle with Wray’s Cole Rockwell at 120, dropping a 9-6 decision.
J. Smith lost by fall (3:56) to Wray’s Cade Rockwell at 113, Sanchez lost by fall (41 seconds) to Highalnd’s Zach Tittle at 138, Ross lost by fall (1:34) to Reid Brown at 145, and Trejo lost by fall (1:01) to Wray’s Tyler Collins at 152.
Then the Indians got busy battling back through the consolation rounds.
Holtorf got a pin of Byers’ Colton Dennison in the consolation semifinals, then was the recipient of an injury default to take third at 120.
B. Smith got a 10-0 major decision over Wray’s Kevin Vasquez in the consolation semifinals, and a 13-1 major decision over Gilpin County’s Kamron Brewer for third at 126.
Brophy won by fall (3:53) over Platte Canyonn’s Noah Hartman in the consolation semifinals, then earned a 13-4 major decision over Burlington’s Jesus Hernandez for third at 132.
Trejo won by fall (4:52) over Stratton’s Will Witzel in the 152 consolation semifinals, then won a 4-2 decision over Limon’s Gaige Hilferty for third place.
J. Smith won by major decision, 10-1, over Burlington’s Matthew Gutierrez in the 113 consolation semifinals, but lost a 3-1 decision to Highland’s Jayce Harrison in the third-place match. Ross won 11-6 over Byers’ Brody Despard in the 145 consolation semifinals, but lost a 4-1 decision to Burlington’s Michael Gutierrez for third. Lynch won a 11-0 major decision over Limon’s Kaysen Schmidt in the 182 consolation semifinals but was pinned by Clear Creek’s Campbell Houston for third place.
Jose Ruiz lost in the 195 consolation semifinals, then won by fall (1:52) voer Clear Creek’s Clay Robertson, finishing fifth. He did not have a chance for a wrestle-back. Blach won two matches by fall to reach the 160 consolation semifinals, but lost his next two to finish sixth. Sanchez lost his last three matches to place sixth at 138.
Sims was 2-0 heading into the 285 championship, the last match of the tournament. He went up against Wiggins’ Laith Ibrihim. He was pinned in the first period, finishing second.