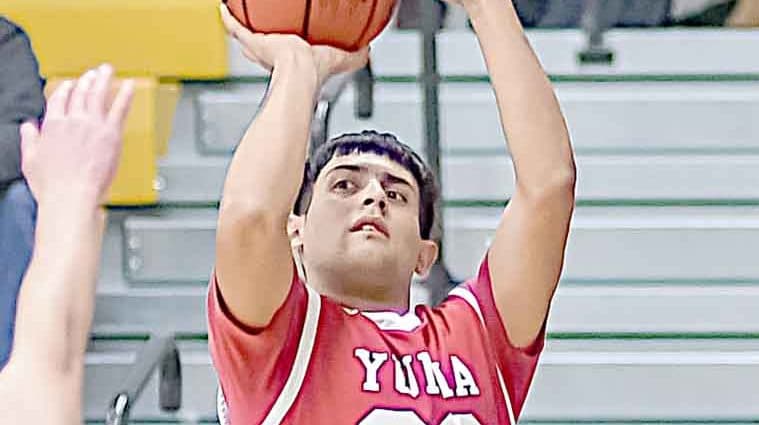 Yuma High School’s boys basketball team will be looking to put the finishing touches on another perfect run through the Lower Platte Activities Association, Friday night.

The Indians, 15-2 entering the final week of the regular season, first host Holyoke today, February 20, in a nonleague game (the first match-up with the Dragons counted in the league standings), then host Haxtun on Friday night for the final LPAA game. The Indians are ranked No. 2 in the 2A Top 10 poll, and are No. 3 in the Rating Percentage Index, which will determine seeding for regional.
Finishing the regular season at home will be a nice change for the Indians, who have played four straight on the road, and six of their last seven. Their last home game was February 1 against Sedgwick County.

Yuma already has gone 5-0 against the other 2A LPAA teams — Wray, Holyoke, Wiggins, Sedgwick County and Akron — to wrap up the top seed in next week’s District 2 Tournament. The Indians have a bye into next Thursday’s semifinals at NJC in Sterling. The top four out of district qualify for regional, so the Indians already have punched their ticket into the round of 32.
However, there is still the last of the regular season. A win over Haxtun will mark the Indians’ third straight 8-0 run through the LPAA.
The 1A Fightin’ Bulldogs enter this week with a 7-11 record, and are 3-4 in LPAA play. They beat Merino and lost to Wiggins last weekend.
Yuma picked up two more wins last week.
The first was a LPAA win at 1A Caliche, 70-34, last Thursday night.
The Indians ran out to an 11-0 lead, and were up 23-9 midway through the second. Coach Dave Sheffield went deep into the bench throughout the game, though regular rotation players Javier Gamboa and Creighton Eyring missed the game with an injury and illness, respectively.
Yuma led 34-12 by halftime, and continued to increase the lead throughout the second half, pushing it to 30, 56-26, on a Clay Robinson basket.
Caliche was held to 28-percent shooting, and also made just seven of 21 free-throw attempts, while committing 22 turnovers. Yuma shot 45 percent, including 49 percent on 2-pointers (20-for-41). The Indians recorded 14 steals and 12 assists, while committing only nine turnovers.The one negative was making just 12 of 22 at the charity tripe (54.5 percent).
Robinson shot 56 percent inside the arc, finishing with a double-double of 25 points and 12 rebounds, along with three assists and three steals. Rolando Caraveo hit three of five 3-pointers, finishing with 15 points, two rebounds and two steals. Cade Morton made two 3-pointers, finishing with six points, two rebounds and two steals, Beau Tate six points and six rebounds, Chase McCreath five points, nine rebounds and five assists, Jonathan Rascon four points, Kobe Rayl four points and three steals, Bryson Castillo four points and three steals, Lane Remmich one point, and Preston Blach two rebounds.
The Indians made the trip to Byers on Saturday for a game rescheduled from the previous weekend. Byers had been blown out by Limon the previous evening, but gave the Indians a battle Saturday afternoon.
Yuma had a rough first quarter, but still led 18-10. The Indians got it rolling in the second quarter, scoring the first six points for a 24-10 lead, prompting a Byers timeout. They stretched it into a 13-0 run for a 31-10 lead, and were up 37-17 at halftime.
It had the makings of a blowout. However, Byers was a renewed team in the second half, scoring the first six points of the quarter and eventually outscoring the Indians 19-10 to cut the margin to 47-36 entering the fourth.
Byers scored scored the first four points in the final quarter to get within 47-40.
However, the Indians then went on an 8-0 spurt for a 55-40 lead, and the Indians held on from there for the 60-45 win.
Both teams shot well, including Yuma making seven of 14 treys and shooting 54.5 percent overall. Byers shot 50 percent inside the arc, but finished 42 percent overall. Both teams shot just six free throws. Yuma held a 25-18 rebounding advantage. Byers had just 11 turnovers, and Yuma just eight.
McCreath had 19 points, eight rebounds and six assists, Robinson 16 points, eight rebounds and three assists, Caraveo made three of four 3-pointers to finish with 11 points along with two assists, Rascon two 3-pointers to finish eight points and eight rebounds, Gamboa two points, Tate two points Rayl two points, and Morton two assists.