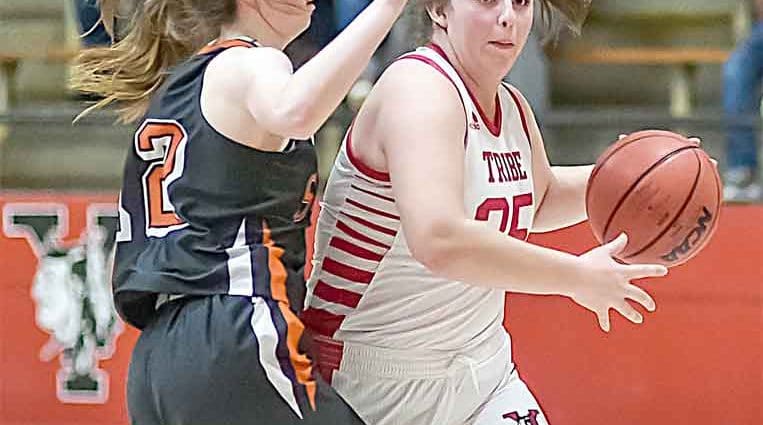 The Yuma High School girls basketball teams roller coaster of the regular season concludes this week.
Hopefully the postseason, which already includes a berth into regional, will be a bit smoother for the Indians.

They enter the final two games of the regular season 8-9 overall, blowing out Caliche last Thursday before letting a home game slip away last Saturday against Sterling. They close out the campaign at home as they host second-ranked Holyoke in a nonleague game today, February 20, and welcome Haxtun to town Friday for the final Lower Platte Activities Association contest.

The Indians are 5-2 in LPAA play entering into Friday’s Haxtun contest. They are 3-2 against the LPAA’s five 2A teams — Holyoke, Wray, Sedgwick County, Akron and Wiggins. They have earned the tie-breaker over Wray and Sedgwick County for the second seed in next week’s 2A District 2 Tournament.
That means they get a bye into next Thursday’s semifinals in Sterling. The top four from district advance to regional, so the Indians are assured of advancing that far.
No doubt the Indians would like to win their way there, starting this week with their final two home games.
It will be a difficult test tonight as Holyoke is 17-1 overall and has claimed the league championship with an 8-0 record. The Dragons are No. 2 in the 2A Top 10, and No. 2 in the Rating Percentage Index. Yuma was 25th in the RPI as of earlier this week.
Friday provides a great opportunity to end the regular season on a winning note. Class 1A Haxtun comes to town 7-11 overall and 3-4 in league play. The Fightin’ Bulldogs lost to Merino and beat Wiggins last weekend.
Yuma went to Caliche last Thursday and had little trouble with the hometown Buffaloes, winning 57-23.
The Indians came out on fire offensively, scoring 19 points in the first quarter, and leading 32-10 midway through the second. Reagan Nolin knocked down two more 3-pointers — she had five in the first half — as Yuma led 42-10 at halftime.
Yuma tacked on 13 more points in the third before the running clock kicked in, scoring just two in the fourth.
Nolin made six 3-pointers, on 11 attempts, finishing with 24 points, three steals and two rebounds. Ema Richards shot 57 percent, finishing with 20 points, seven rebounds and two steals. Taylor Law had seven points, two rebounds and two steals, Elle Roth four points, seven rebounds, three assists and two steals, Lea Richardson two points, four assists and three steals, Meidi Reyes five rebounds and five assists, Sam Wells rebounds, and Lainey Mekelburg one rebound, assist and steal.
The Indians were finally home again last Saturday for the first time in two weeks, with a prime opportunity to get above .500 with a struggling Sterling team visiting.
It was looking good early as the Indians raced out to a 16-8 lead. They could not get any further separation in the second quarter, but still led 23-16 at halftime.
Sterling inched one point closer in the third as both teams reached double figures, Yuma leading 34-28.
However, the Indians could not make a bucket, or a free throw, down the stretch. They scored just two points in the fourth, and made one of six free-throw attempts for the game.
Sterling eventually caught up late in the fourth, finally pulling ahead in the final minutes to steal a 38-36 decision from the Indians.
Nolin finished with 15 points, three assists and three steals, E. Richardson eight points and two rebounds, Roth six points, eight rebounds and four assists, Law three points and four rebounds, Reyes two points and two rebounds, L. Richardson two points and two rebounds, and E. Richardson two rebounds.