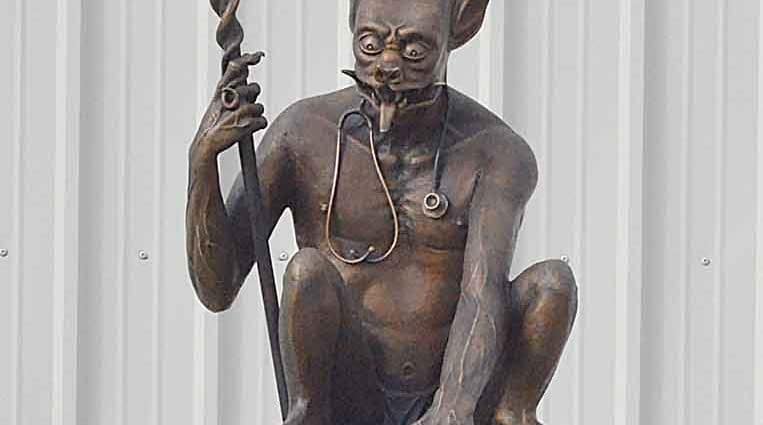 Gargoyles recently installed at the west end of town have caught the attention of many in the community.
Yuma resident Rick Seedorf commissioned Lundeen Studio in Loveland to have them done, and put up on pedestals outside his farm shop off of Kamala St. west Yuma District Hospital & Clinics.
Seedorf and his wife Ruth were freshmen at Hastings College when George Lundeen was a senior. Lundeen went on to become an accomplished sculptor.
“We didn’t know George but were impressed by his senior art major exhibit,” Seedorf explained. “It was a decade later and we began to see his name on bronze sculptures in the Denver area after reading about his work in the HC Alumni News.”
About 10 years ago the Seedorfs were on a trip with their son and daughter-in-law. They saw the famous Notre Dame during the trip, and took note of gargoyles and grotesques on the cathedral, and other buildings. On the same trip they saw the renowned sculpture “The Thinker.”
“Maybe then, I wondered what he was thinking about and concluded this: ‘You know what there isn’t enough of in northeast Colorado? Gargoyles! We need more gargoyles!’” Seedorf shared.
They contacted the Lundeen Studio over a year ago and the design process began.
“Though George himself did not work on these two pieces, his son Warner and fellow artist Joel Turner made clay models based upon two ideas: one stemmed from the Republican River lawsuit, the other from seeing my parents and others deal with the maze of issues that present themselves as we age,” Seedorf said.
Below is a submission from Seedorf in which he explains gargoyles, as well as specifically what Yuma’s two gargoyles represent:
“Whether art is painting or sculpture, interpretation is the prerogative of the viewer. Sometimes, though, an artist has a clear intention.
“Since many people could not read in medieval times, artists provided an avenue to understand Biblical stories through cathedral paintings and stained glass representations. While the message delivered inside the cathedral became clear, the symbolism of other art forms outside the church often were transformed into reminders to keep the faith and to live a good life. The architecture of many of these magnificent structures include the use of gargoyles and grotesques to warn of the consequences of one’s action or belief.
“Gargoyles were thought to ward off evil, and their function architecturally did just that by extending beyond the sides and corners of buildings to spew water away from the building. While a gargoyle’s open mouth must drain water away, grotesques were used to let the passerby know that they were always watching and that no activity escapes notice!
“Today’s grotesques and gargoyles are more to amuse than to remind of our frailties. As an art form, they are figures offering imaginative freedom with few limitations. There are now two new, profane characters looking in on Yuma County. One is in the form of a bull, complete with horns and a nose ring, holding an empty water vase.

His expression is one of fear. Bulls in the 13th century were of elevated stature because they pulled building materials uphill for cathedral construction. This bull is unlikely to be so honored, but he will be reflecting the ambiguity of water issues in the Ogallala basin.
“The other is a medical representation inspired by members of the greatest generation, including my parents, who have witnessed so many changes in how health care is governed. This winged medic is beset by changes in health care administration. The arthiritic creature’s pain is exacerbated by confusion and delay as it clutches HIPAA guidelines. As this medic looks to the therapy equipment and walking trail at the hospital, its clutched medical symbol, and winged staff, is a reminder we have care when our own efforts are not enough.
“The bull and medic are but snapshots of our time, of the issues we face, and these creatures are meant to be enjoyed, to appeal to the things we cannot fully understand. Art is in the eye of the beholder, it is true. But often times, the beholder is also in the eye of the art.
“The sculptors are Joel Turner and Warner Lundeen, and are creators at the Lundeen Studio in Loveland.”
Drive by and check them out sometime, they are quite a sight to behold.