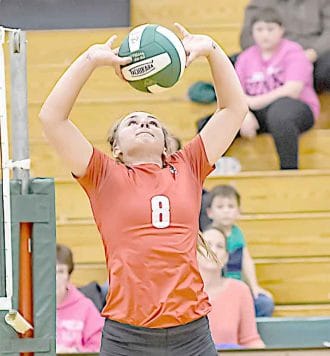 Reagan Nolin — The senior had a great ending to her high school volleyball career, helping lead the Indians to the 2A State Tournament for the eighth consecutive season. A four-year varsity player, Nolin was the Indians’ setter the past two seasons, recording 748 setting assists in 2019. She led the team in service aces with 44, while serving 90.5 percent from the line. Nolin also got in some hitting action, recording 38 kills, fourth best on the team. She was second on the team in digs with 298.
Elle Roth — The sophomore stepped into the main hitting role for the Indians this season and handled it in style, leading the team with 348 kills. She was tough on the back line also, leading the team with 345 digs and 418 serve receives. She was 91.8 percent at the service line with 30 aces.
Ema Richardson — The junior did a fine job stepping into a main varsity role this season. She was second on team in kills with 223. She had 149 digs. Richardson was second on the team in service aces with 39, and second in serving points with 177.