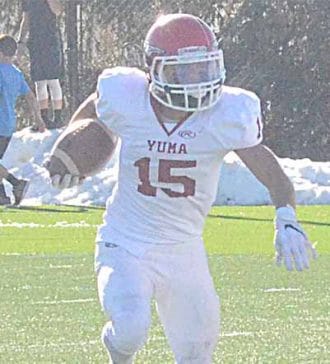 Yuma High School’s football team finished third in the tough North Central Conference, and made the playoffs for the first time in six seasons.

That success was reflected in the postseason awards and six Indians were named to the 2019 All-NCC Team by the conference’s coaches. League champion Limon, which also won the 1A title last Saturday, led the way with nine selections.

Chase McCreath, athlete — The senior was selected to the All-NCC on offense in the “athlete” category. The starting quarterback for the past three seasons, as well as a defensive back, McCreath helped lead the offense to its best production in years.

Cayden Lynch, linebacker — The senior was a key player on offense and defense the past few years for the Indians. He made the All-NCC team on defense as he was among the team leaders in tackles. He also led the team in touchdowns, and the leading rusher.

Rolando Caraveo, receiver — The senior missed his junior campaign with an injury, but returned to help the Indians reach the playoffs in 2019. He was among the team’s leading receivers on offense, and also was among the team leaders in interceptions on defense.

Alec Holtorf, defensive back — The senior had a great final season at cornerback, proving to be a reliable and punishing tackler on the outside. He was a leader in the secondary in tackles, and on offense was an effective blocker, and scored one touchdown.

Jose Ruiz, offensive line — The sophomore was a key cog on a young line that provides great promise for next season. He helped the Indians to their best offensive output in years in 2019 on the offensive line. He also saw time on the defensive line, picking up some sacks and plugging up the opponents’ run game.

Clay Robinson, running back/defensive back — The sophomore missed most of the first four games dealing with a nagging leg injury, but returned in time for conference play and had a key role in the Indians winning their final three NCC games to reach the playoffs. He ended up being among the team leaders in rushing, touchdowns, receptions, as well as interceptions on defense.