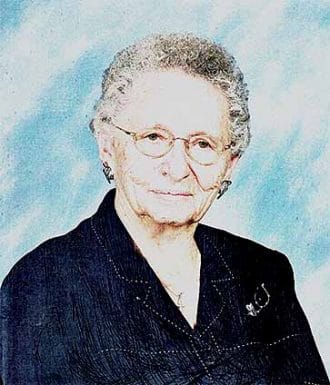 Nora Arnita Prescott passed away at the Washington County Nursing Home in Akron, Colorado on October 25, 2019 at the age of 101. She was born December 24, 1917 on a homestead, northwest of Yuma, to William and Elizabeth Klein Mekelburg. On February 14, 1937, she was united in marriage to Selmer G Prescott. To this union, three children were born: Ann Wunsch, Jean Prather and Selmer Prescott.
In their early years of marriage, Nora and Selmer farmed in Flagler, Colorado, before buying a farm south of Platner. In 1952, they sold the farm and moved to Yuma. During this time, they owned the Enco filling station in Otis. After retirement, they spent time between Yuma and Arizona. Following her husband’s passing, she spent her time working at Popcorn’s, making specialty popcorn and her family’s German potato salad. She continued to enjoy her home and family before transitioning to the nursing home, where she spent her remaining years.
Nora was known for being kind-hearted, generous, and giving, always willing to share what she had with others. She had a passion for cooking, baking, and spending time with her grandchildren, nieces, nephews and neighborhood children.
One of the most important aspects of her life was her faith. She was a lifetime member of the Yuma Presbyterian Church. She loved going to church, and it was a very difficult time for her when she could no longer drive and pick up a neighbor or friend to take with her. It was a huge blessing when her friends and church members were able to return the favor so she could still attend church services. Her faith was strong and it carried her through the years.
Nora was proceeded in death by parents – William and Elizabeth Mekelburg, husband Selmer Prescott, brothers – Stanley (wife Violet) and Lawrence (wife Maxine), sisters – Evelyn Peters (husband Lee) and Erma Faye Murphy (husband Bob), son-in-law Clifford Wunsch, and her grandson Don Prather.
Nora is survived by her daughters – Ann Wunsch and Jean Prather (husband Ray); son Selmer (wife Emma); nine grandchildren – Robert Wunsch (wife Kym), Bud Wunsch (wife Jana), Ed Wunsch, Dave Prather, Dee Prather, Roxanne Prather, Steve Prescott (wife Jame’s), Shane Prescott and Peggy Prescott; twenty-one great grandchildren and two great, great grandchildren.
A service was held November 5, 2019 at 10:30 a.m. at the Yuma Presbyterian Church with Rev. Jamie Fiorino officiating. Interment followed at Yuma Cemetery by Baucke Funeral Home.