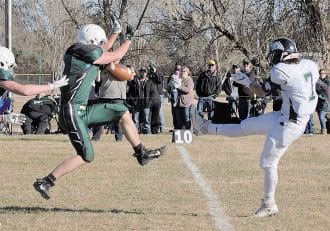 By: yumapioneer
In: Sports
With: 0 Comments

On the 20-year anniversary year of Liberty beating Idalia in an all-time classic 6-man championship game, the Stratton/Liberty Knighted Eagles and Fleming Wildcats played another one for the ages.

Toby Kechter was one of the main players for Liberty in that memorable win in 1999, and now is the coach for Stratton/Liberty, having won two state titles this decade and advancing to three consecutive championship games.

However, Kechter’s squad was on the losing end Saturday, in Stratton, dropping a 28-27 heartbreaker.

The winning points were scored by the most rare of scoring occurrences in football, a safety after the snap sailed over the Stratton/Liberty punters head late in the game. Even then, it was a heady play by the punter by booting the ball out of the back of the end zone to give the Knighted Eagles still a chance to win at the end.

“We played an awesome game and had an awesome season,” Kechter said. “Fleming is a great team and is very well coached. We were one play away from holding the trophy. We as a coaching staff, Jesse McConnell, Christian Hornung and myself are so proud of our team. We want to thank everyone involved in helping us this season from administration, bus drivers, chain gang, announcers, cheerleaders, maintenance, booster clubs, and all our supporters in the Stratton/Liberty communities.”

Stratton Liberty received the opening kickoff and went three and out on their first possession. A poor punt into the wind gave Fleming the ball at Stratton/Liberty’s 20-yard line.

Fleming scored next after converting a third-and-15 on a long pass to go up 14-8. Lichty scored again to close out the quarter, and Zeke Craig found Tyler Hase on a broken play for the one-point conversion. Stratton/Liberty led 15-14 after the first quarter.

Both defenses played well in the second quarter, with Stratton/Liberty taking it down and scoring, but it was negated by a holding penalty, and the team turned it over on downs. The score remained 15-14 at halftime.

Fleming scored first in the third quarter to take a 20-15 lead, but Lichty scored one more time to take a 21-20 lead after three quarters.

The Knighted Eagles scored first in the fourth quarter with 8 minutes left on a 27-yard run by Lichty to take a 27-20 lead after the PAT kick was blocked.

The defenses played well for most of the quarter. Alex Cruz forced a fumble on a strip sack, and Lichty picked it up and returned it to the 10-yard line. The Knighted Eagles had a fourth-and-goal from the 1-yard line, with a chance to put the game away, but could’t punch it in and turned it over on downs.

Fleming brought it out to the 10-yard line, and on third-and-five broke a 70-yard run to get within 27-26, after Will Witzel blocked Flemings PAT kick attempt.

With 57 seconds left, the Knighted Eagles faced a fourth-and-14 on the 25-yard line and elected to punt. The punt snap sailed over the punter’s head and rolled down to the 1-yard line where the punter made a very heady play, kicking the ball out the back of the end zone for a safety, giving Fleming a 28-27 lead.

The Knighted Eagles then had to kickoff to Fleming after the safety. They tried an onside kick but could not recover it.c

However, they got the ball back with 44 seconds left after spending all their timeouts to stop the clock. Four failed pass attempts ended the game.

The defense played great all day, Kechter noted, with freshman Logan Breyer leading the team in tackles with 14, four for loss and two sacks; Trevor Frank 13, Lichty 11, Cruz 10 and a sack fumble, Zach Armour seven, Tyler Hase and Zeke Craig three each, Charlie Clapper two and Riggin Williams one. Offensively, the team ran the ball well with Lichty having 267 yards and four touchdowns on 28 carries, Frank 12 carries for 53 yards, and Clapper with three carries for 10 yards. Zeke Craig went 4-10 passing for 25 yards. Hase caught two for three yards, Frank one for nine yards and Lichty one for 13 yards.