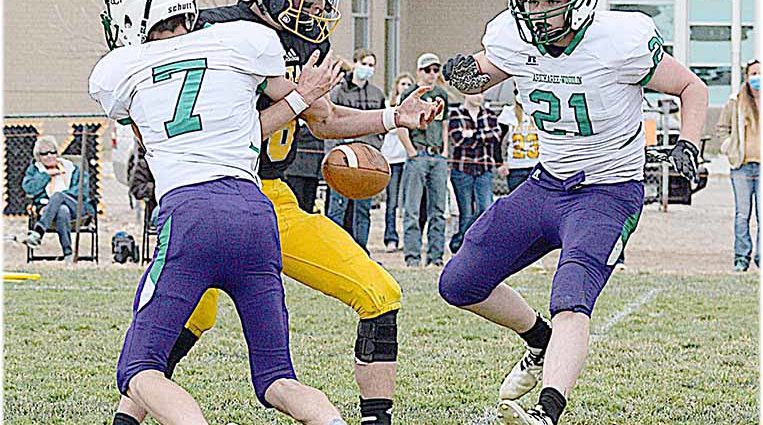 Arickaree/Woodlin, and possibly Otis will close out the regular season on the field.
The Indian/Mustangs, 2-3 overall, close out the truncated 2020 campaign Saturday afternoon at Hanover.

Otis was supposed to play its last home game last Friday night against Flagler. However, that was called off on Friday as some Otis players had been exposed to someone with a positive case.
It had not been decided earlier this week if the Bulldogs’ season finale at Idalia on Friday would take place. Idalia is just coming off a two-week quarantine, and will have only one day of practice, and Otis would not have enough players if one more test comes back positive.
Washington County has been hit hard by COVID-19 cases recently, including as many as eight residents requiring hospitalization.
However, Arickaree/Woodlin has been able to avoid the pitfalls so far. (Arickaree is in Washington County, Woodlin is in Morgan County. Both counties this week went to the Orange Level in the state’s COVID designations due to rising cases.)
The Indian Mustangs made the trip to Prairie near New Raymer last Saturday, seeing their two-game winning streak come to an end with a 47-20 loss to the Prairie Mustangs.
Prairie, 4-1, is ranked No. 5 in 6-man (CHSAANow.com polls), and showed the Indian Mustangs why it has that lofty ranking.
Arickaree/Woodlin kept it close early, trailing only 6-0 after the first quarter and 20-16 at halftime. Prairie methodically pulled away, outscoring the Indian Mustangs 27-14 in the second half, taking a 28-6 lead into the fourth quarter.
Arickaree/Woodlin had 188 total yards, including 111 through the air. Nic Hermes completed three passes for 34 yards and a touchdown, Logan Wright two passes for 49 yards and a TD, and Angel Servin one pass for 28 yards. Tristin Niccoli caught one pass for 33 yards and a score, Connor Jesse one catch for 22 yards and a score, Wright one for 28 yards, Sevrin two for 21 yards, and Estan Ramirez one for seven yards.
Servin rushed for 49 yards on six carries, Wright 19 yards on 10 carries, Samuel Koolstra 17 on five carries, and Niccoli one rush for three yards. Sevrin returned a kickoff for a touchdown. Prairie had 399 total yards.
Defensively, Koolstra was in on 15 total tackles, Niccoli eight, Wright eight, Servin seven, Aydon Escobedo five, Jacob Jefferson five, Estevan Ramirez four, Hayden Page three, Landry Peeples three, Hermes one, and Bryce Shaffer one.