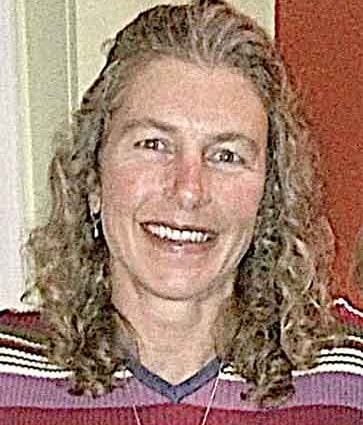 It is with heartbreaking sorrow that her family shares the news of the death of Andrea Lynn Koenig. She was born February 13, 1970 in Yuma, Colorado. She passed away, at age 50 on March 16, 2020 at her home in Denver, Colorado.
During her 50 years on earth, Andrea had many personal accomplishments and achievements that were the result of her unique and truly amazing drive, determination and commitment to success.
From childhood, she exhibited her core personality traits of kindness, compassion, humility, tenacity, brilliance and courage. An enormously talented woman, Andrea excelled in all she set her mind to; gymnastics, track, academics, skiing, climbing, and cycling.
In 1988, she graduated from Yuma High School and went on to pursue track in addition to her academics at Occidental College, where she graduated with honors. She continued her education and was awarded her PhD in biochemistry at UC San Diego. Throughout, she was beloved by her professors, classmates and teammates; in graduate school she contributed to valuable research in science and received a patent in the biochemistry field. Postdoctoral work included time at Colorado State University, Colorado School of Mines, and the Swiss Federal Institute of Technology in Zurich, Switzerland.
Andrea’s zest for the outdoors, saw her accomplish expertise in both mountain climbing and rock climbing. In her mountaineering, she successfully climbed all 96 of the 14er’s in North America. She even attempted Denali but was thwarted at over 18,000 ft. when a companion got seriously ill with altitude sickness. During her quest for the 50 Classic Climbs of North America, she had reached the summits of 36. One of her most amazing adventures was climbing El Capitan and she went on to accomplish this climb two more times.
An example of her grit and determination was when she decided to try running a half-marathon in San Diego; she wound up winning the event for women runners and second overall.
In her late 30’s, she took up cycling and this became an avid love. She found a tribe of like-minded cyclists and began training in earnest. Even recreationally, she’d ride the 80 miles of mountainous roads from Denver to Breckenridge. Time trials, criteriums and road races became her routine and more often than not she was standing atop the podiums. In 2016, she placed first in the Colorado State Time Trial Championships. In 2012, she won the Pedal the Plains race when it first debuted, cycling 120 miles through her hometown of Yuma. She accomplished the grueling 600+ mile ride from Denver to Kansas in record time.
In her ski-mountaineering, she did the Aspen Power of Four and the Grand Traverse, a race that starts at midnight, and travels from Crested Butte to Aspen.
Andrea also had a great love of music, she played piano, and loved attending concerts and exploring emerging musical artists. In addition, she loved baking and creating desserts, which became her calling card for visits to friends and family.
She had a great sense of humor, a darling giggle and a perennial smile. And no matter her fierce discipline and training, she was always revered as a modest, kind, and gentle soul.
Andrea is preceded in death by her stepfather, Mark Haruf and stepbrother, Marki Haruf, her grandparents, and several aunts and uncles. Andrea is survived by her parents; Kathy Haruf of Highlands Ranch, CO and her father, Dean Koenig of Yuma, CO. Her sister; Wendy (Phil) Wyatt, brother; Rick (Nicole) Koenig, and stepsister, Lexi (Rob) Owens and two sons. Nieces; Makenna, Gabriella, and Isabella Koenig, Nephews; Michael (K.C. and their son, Jonathan), Christopher, David, and Daniel (Laurel) Wyatt. Andrea has an extended family of aunts, uncles, cousins and a countless legion of friends spanning from her childhood in Yuma, colleges in California, work in Switzerland and across the globe from her cycling, climbing, and skiing world.
In lieu of flowers, memorial donations may be made to the Bike Racing Association of Colorado (BRAC), Team Colorado Junior Program that supports and encourages young bicyclists in Colorado and southeastern Wyoming. Team Colorado is comprised of our state’s brightest up-and-coming junior racers. Once racing resumes, the Team will be racing in honor of Andrea.