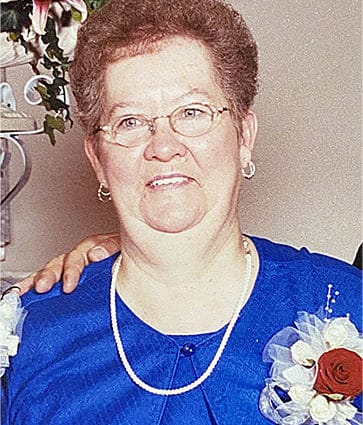 Betty Fern Adamson-Owens was born May 6th, 1944 in Wray, Colorado to Bert Ellsworth and Maudie Frances Claridge Adamson. She was the 6th of seven children.
When Betty was two years old, they moved from Beecher Island to Eckley, where she spent the next seventy-four years. She went to grade school in Eckley, until 10th grade, then graduated from Yuma, Colorado in 1962.
She married John Owens, Jr on January 22nd, 1963. To this union, four children were born: Dave Eugene, Joni Jean, Beth Renee, and Johnny Jay.
John and Betty ran and operated the J&B Bar for 26 years together. Betty ran it for 10 more years after John’s passing.
Betty was on the committee to form the monument for the Eckley school, which stands at the Eckley park. She was also a member of the Eckley Community Church.
In Betty’s younger years, she enjoyed dancing, taking kids to different activities, going to supper on Sunday night after the bar closed, family vacations, gardening, and teaching grandkids to play Skip-Bo. Joni accused her of cheating, but was just a poor sport.
Grandma always had special treats for the grandkids. They certainly were not denied them by their parents without a scolding.
Grandma Betty enjoyed facetiming with granddaughter Aftyn to watch great-granddaughter, Lacey, grow and play. That was a highlight of her day. Betty enjoyed going for rides around the town, putting together family reunions, picnics at the park, sitting on her porch and visiting with family and friends, and watching people go by. She loved taking granddaughters Shelby and Aftyn to the duck pond. One day when they were watching the ducks swim, when a duck got out of the water, Shelby said, “Look, Grandma! They have feet!”
Grandma Betty enjoyed visiting with granddaughter Allison when she rode by on her horse before watching her at the arena. She was adamant about watching her at Rodeo Bible Camp; despite the fact that it was hot outside. She also enjoyed watching her grandson John ride his motorcycle and driving to Holyoke to watch him race his car.
She enjoyed the summers which Aftyn and Shelby spent with her, who in turn agree that these summers were some of the best times of their lives. She enjoyed making different crafts, traveling and selling her candles.
Betty was loved by all who met her and made a huge impact on many people’s lives; so much so that many considered her a second mother to them.
She is survived by her son; Dave of Eckley, daughter; Joni and husband Stuart Turvey of Eckley, daughter; Beth and husband Roy White of Douglas, WY, Jay Owens and wife Dena of Eckley. Grandchildren: Shelby Dawn White of Tucson, Arizona, Aftyn Iola White and fiancé, Tyler Stotsky of Sherman, TX, John Emery Turvey of Eckley, Brent Michael White of Eckley, great-granddaughter Lacey May Stotsky of Sherman, TX, Brother; Delbert and wife Verla Adamson of Laird, CO, sister; Velma and husband Bill Foxworth of Warren, TX, as well as many nieces, nephews and friends.
She is preceded in death by husband, John Owens, granddaughter, Allison Turvey, parents, Bert and Maudie Adamson, brother, Stanley, sisters, Dorothy Akes, Lila and husband, Leland Hackett and Doris and husband, Wally Hall, father and mother-in-law, John and Bertha Makings-Owens, brothers-in-law Frances and wife, Della Owens, Bud and wife, Erma Owens, Melvin and wife, Dorothy Owens, sisters-in-law Iola and husband Loyd Berger, Nila and husband, Ivan Dewey, and Viola and husband, Roy Frick.
A Receiving of Family & Friends was held at the Schmidt-Jones Funeral Home in Wray, Colorado on Sunday, August 30, 2020.
Funeral service was held at the Eckley Community Center in Eckley, Colorado on Monday, August 31, 2020 with Jonathan Shaw officiating.
Interment in the Eckley Cemetery in Eckley, Colorado followed services.
Memorials may be made to the Betty F. Owens Memorial Fund, c/o First Pioneer National Bank, 145 W. 4th Street, Wray, Colorado.
Schmidt-Jones Funeral Home was in charge of arrangements.