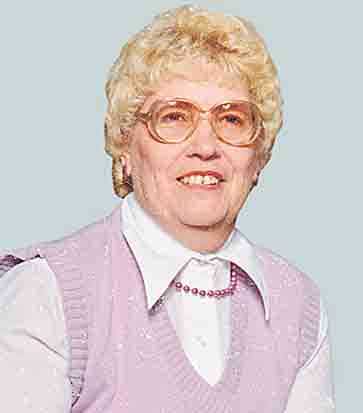 On August 6, 1933, Betty Lou Aagesen was born on the Aagesen homestead in Washington County, which was located approximately 15 miles north and 5 miles west of Yuma. Betty was the second child born, but the first of three daughters of Harold and Gertrude (Hodgkins) Aagesen.
Betty attended Pleasant Hill school at the age of six, and attended first through eighth grade. Betty rode her horse, was taken by her father, or walked the three and a half miles to the one room country school. Betty graduated from the eighth grade in 1947, but she was unable to attend high school because there wasn’t any transportation to the school. Betty spent her time helping her dad with the farm work, driving the truck for wheat harvest, hand-milking the cows with her mother and riding her horse [Queen] while herding cattle all day long.
Betty became an active member of the Rough Riders Club when she was sixteen years old. She learned to square dance on a horse, and she barrel raced with her horse [Queen] and her father at several rodeos. They placed first in most of the competitions they entered. Betty began barrel racing at rodeos when her father made a bet with another man that she wouldn’t be able to ride Queen in a barrel race. At the start of the barrel race she lost her stirrups and landed behind the saddle. Determined to win the race, she jumped back into the saddle and finished in first place in less than thirteen seconds.
In 1953, Betty moved to Yuma and worked for a café owned by her aunt and uncle. While working at the café, she met her future husband, Vincent Gallagher, who came to town from North Dakota with a seismograph crew. On April 18, 1959, Vince and Betty were married at St. John’s Catholic Church in Yuma, Colorado. On June 24, 1979, Betty was baptized in the Catholic Church. During Betty and Vince’s 60 years of marriage there were three children born, Juliana Marie in 1960, Catherine Ann in 1962, and Steven Patrick in 1964.
Betty started working again in 1961 at a restaurant. In 1966, she started working at a Laundromat for seventy-five cents an hour, and then obtained employment at a local restaurant called the Red Roster. Betty worked as the cook and made homemade pies. After leaving the restaurant in 1969, Betty started working at Skogmos Department Store until 1974, and then started baby-sitting for various local residents. During the next fifteen years, Betty cared for approximately seventy-five different children. In 1989, she began driving for American Courier Corporation. During that time, Betty took in her mother for four months after she suffered a stroke. At the age of 70, Betty stopped driving for American Courier.
In 1994, Betty was diagnosed with cancer. After surgery and treatment, Betty was able to overcome this challenge in her life. In her later years, Betty suffered from a lung disorder and heart disease. Betty’s hobbies were cooking, embroidering, and sewing. Betty was known to make anything from small lacy dresses for children, to prom dresses, graduation dresses, and wedding dresses for her daughters and granddaughters. She made western wear and coats for her family as they grew up. Betty did all of her sewing without the aid of patterns because it was easier for her. Betty made several cakes for birthdays and weddings.
Betty Lou Gallagher passed away on January 17, 2020 at the age of 86 in her home surrounded by her family.
Betty is preceded in death by her parents Harold and Gertrude Aagesen, her brother Harold Aagesen Jr., and her daughter Juliana Gallagher. Betty is survived by her husband Vincent Gallagher, her daughter Catherine Hoffman, her son and daughter-in-law Steven and Carin Gallagher, her sister Hellen Jones, her sister Barbara Powell, her eight grandchildren, and ten great-grandchildren.
There was a Rosary Service held Thursday January 23, 2020 at the Saint John’s Catholic Church at 6:30 p.m. A Catholic funeral mass was held for Betty Gallagher on Friday January 24, 2020 at the Saint John’s Catholic Church at 10:30 a.m. Following the mass, there was an internment at the Yuma Cemetery. Arrangements were conducted by Baucke Funeral Home.