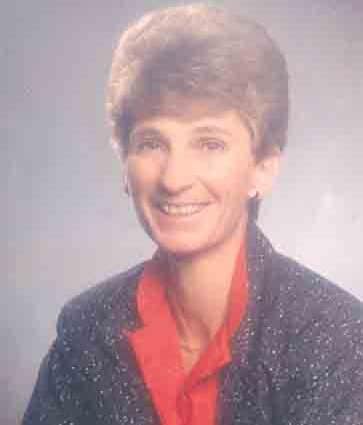 Eva Louise Dietz of Kirk, Colorado, was born to David “Shorty” Thomason and Vera Lela (Johns) Thomason on May 4, 1939, in Cope, Colorado. Even at a young age, Eva was full of life. She always spoke of ice-skating, and how much she loved it as a child. She also loved playing in the stock tank; riding bare-back on horses; riding behind her grandma Buckle’s on her horse, Trigger, to check cows; making ice-cream old churn; and having water fights with buckets. Her grandsons remember how much she enjoyed telling them about drag-racing from the county-line back to Kirk and driving the occasional derby car. Believe it or not, she was even a majorette in high school and could twirl a baton like nobody else. Eva attended the Cope School until 1956, when she married Richard Charles Dietz at the Cope Methodist Church on June 10.
Together Eva and Dick had two children: Steven Gary, born April 24, 1958; and Brenda Maragaret, born April 29, 1959. Eva and Dick moved around much of Eastern Colorado when they were first married and when the children were younger, as Dick’s work in construction kept them from settling down. In the mid sixties, the family eventually settled in Kirk, and it was here that Dick and Eva raised their family.
Sadly, in 1977, shortly after the marriage of their son, Steve, to Janet Jackson of Joes and birth of their first and only granddaughter, Tasha, Dick and Eva lost their son in an accident.
In 1978, they welcomed a son-in-law into the family, when Brenda married Dan Drullinger of Cope. Brenda and Dan blessed Eva with two more grandchildren in the following years: Cory and Dayton. Her heart broke a second time, when she lost her cherished son-in-law, Dan, in 1999. All of Eva’s children and grandchildren were the apples of her eye. She loved working on the farm with her family and being involved in harvest. Grandson Cory remembers times with her fondly.
She was the best grain cart driver around and could out-cart any man of the farm. She taught all of us to cart, and we couldn’t have learned from a better driver. I do, however, remember getting in the cart one day after school and getting my hand shut in the door and, at the same time, getting a cigarette burn on the other hand when she tried to help.
When they were not working, the family loved to play together. They all went to the lake every weekend; Eva would always fry two chickens and make numerous salads to keep her family happy and full at the lake. Despite loving the lake and being quite the water-skier, Eva was absolutely terrified of the water. She never really learned to swim; she just used her life jacket or ski belt to give her the security she needed. She didn’t only teach her grandsons to water-ski, she also taught many others. The day after her death, we received a message from Lora Liming talking about how much Eva would be missed, and how Rodney had learned to water-ski from Eva many years ago. She was quite the teacher.
About seven or eight years ago, Cory and Dayton’s families, along with Brenda and Eva, went up to Ender’s Lake in Nebraska to get some water-skiing in. As spunky and determined as always, Eva decided that she was going to see if she could still water-ski. With her jeans still on, she jumped in the water, slapped on the skis, and popped right out of the water. She rode along for a small circle, then let go of the rope. The next week at the doctor’s office, Eva mentioned nonchalantly that she had twisted her knee while water-skiing, and it hurt a little. The doctor looked at her incredulously and said, “You did what!?!?!” Her reply was simple and quintessentially Eva: “Well, I only did a small circle.”
There has never been, nor will there ever be, someone quite like Eva. Though she was little in stature, she was mighty in personality. She loved fiercely, lived fully, and cherished her time with her family. Her roses brought her joy, and she loved teaching her granddaughters-in-law how to make all of her grandsons’ favorite foods. Later, when her great-grandbabies came along, her heart grew bigger and bigger. She adored her children, her grandchildren, and all of her great-grandchildren, even those not blood relation.
To list all of the memories we have of Eva could take so very long. So, for a moment, let me just mention a few keywords: popcorn balls, cabbage pockets, little Mazda pickup, homemade rolls, Elk’s Lodge, donuts, penny-poker, heartfelt gift-giving.
Eva passed away on Thursday, January 23, with her daughter and her two grandsons by her side. She is preceded in death by Parents David and Vera Thomason; brother Dave Thomason; son Steve Dietz; son-in-law Dan Drullinger; Dick Dietz; and Fred Morris.
She is survived by daughter Brenda Drullinger and Mason King of Cope; daughter-in-law Janet Englehaupt of Sterling; granddaughter Tasha (Jody) Roth of Fort Collins; grandsons Cory  (Rachael) and Dayton (Megan) of Kirk; and brother Wes (Lorene) Thomason of Cope. She is also survived by great-grandchildren: Jillian, Thatcher, and Holden Roth of Fort Collins; Haydan and Morgan Drullinger, and Garret, Hunter, Logan, and Emmaline Drullinger, all of Kirk.
A funeral service was held at the Grassroots Community Center on January 28, 2020 at 10:30 A.M. Interment followed at the Kirk Cemetery. The service was officiated by Thomas Cummins. Memorial Contributions can be made to Hospice of the Plains; 615 W. 8th Street, Wray, Colorado 80758. Baucke Funeral Home directed the service.