COVID-19 definitely wreaked its havoc on the end of the Yuma High School boys golf team’s season.
Boys golf was one of first sports approved to be played in the “fall” season, and things went well as several golfers got in many varsity and JV tournaments, with all improving their scores along the way.
However, then came the start of school, and eventually COVID caught up.

YHS had its first confirmed case announced Wednesday afternoon, and the school district put YHS on remote learning for Thursday and Friday while contact tracing was done to determine who had direct contact.
The Indians were supposed to compete Thursday in the Northeastern League Tournament in Wray, but that plan got scrapped.
However, after the contact tracing was done, and students and staff identified for quarantine, coach Benjamin Weathers had a quality varsity foursome available to take to the Class 3A Region 3 Tournament in Greeley. 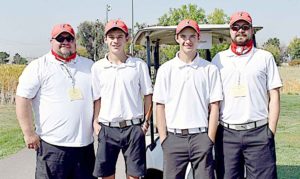 However (again), YHS announced two more confirmed cases on Saturday. The contact tracing resulted in two of the four regional-bound golfers having to go into quarantine.
That left just junior Brekyn Josh and sophomore Nash Richardson to compete at the Boomerang Golf Club on Monday.
Richardson shot a 96 and Josh a 98. The cutoff to qualify for the state tournament was 86.
“The last week has been such an emotional rollercoaster, so for them to go and compete and shoot scores close to what their average is for the season is a testament to their mental toughness and heart,” Weathers said.
The coach noted that overall the program had a successful season with four team wins between the varsity and JV, and John Smith winning the Washington County Invitational in Akron.
“This was one of the best seasons we’ve had since I’ve been head coach (six seasons) and it was too bad that it had to end the way it did,” Weathers said.
He thanked the YHS and district administration, and the YHS staff, for all the hard work they put during this past week.
“The effort they put in enabled us to at least finish the season at regionals,” Weathers said.

2020-09-24
Previous Post: 6-man football realigned a bit
Next Post: All of YHS softball can’t even practice together