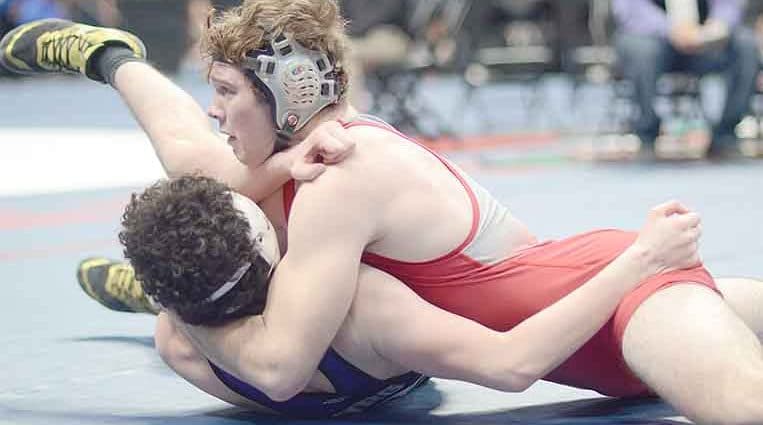 Yuma High School’s wrestling team came close to breaking through to the big time, last weekend at the Class 2A State Wrestling Tournament at the Pepsi Center in Denver.

Yuma had its first wrestler in the championship round for the first time since 2011, when Tyler Korf won a state title, with Blaze Brophy finishing second at 132 pounds. The Indians has one other placer, senior Cayden Lynch finishing fifth at 182, and had two more grapplers one win away from medal stand.
All in all, one of the best showings for the Indians in recent years, finishing in a tie with Peyton for 17th place with 40 points.
“It was obviously very exciting, almost to the point where we didn’t want it to end,” head coach Rory Lynch said.

Rival Wray, with two state champions and a handful of placers, won its third straight 2A title, and a state-best 14th state championship overall, with 162.5 points. The Eagles had the three-peat in hand even before the championship round began.
Rocky Ford was a distant second with 123.5 points, while Cedaredge was third with 98, Highland fourth with 95.5, and Centauri fifth with 91. Among other area teams, Wiggins was 12th with 52 points, Sedgwick County/Fleming 14th with 49.5, Akron 23rd with 32, Burlington 24th with 27, Holyoke 25th with 22, and Stratton/Liberty 31st with 14.
Thursday’s preliminary round did not have a promising start for the Indians as only two of eight came away victorious.
Braden Smith won a tight 2-1 decision over Destry Schmidt of North Park at 126, and Brophy cruised to a 14-2 major decision over Sierra Grande’s Richard Atencio.
It was Brophy, he of the extended club wrestling experience, that carried the torch throughout the state tournament. The junior battled for a 1-0 win over Cedaredge’s Sean Dale in the quarterfinals, Friday morning. He got his point off an escape in the second period, the masterfully held off Dale the rest of the way for the win.
Brophy was back on the mat Friday night in the semifinals against Highland’s Lucas Hefner. It was the second straight year Brophy had reached the semifinals, only last year had he ran into tough sledding and finished near the bottom of the medal stand as Yuma’s only placer.
This year he was able to follow through. In another classic defensive battle, Brophy and Hefner were tied 1-1 at the end of regulation, setting up a nerve-wracking sudden death overtime. Brophy came up with the decisive two points with a takedown in overtime, sending him into Saturday night’s championship.
Brophy, who was joined in the Parade of Champions by his father, Don Brophy, met Byers’ legend-in-the-making Lain Yapoujian, via Pomona’s 5A wrestling juggernaut. (He and his brother transferred from Pomona prior to the start of the school year.)
It was another defensive battle, with Brophy coming up just short in a 3-1 decision for the Byers grappler.
Brophy finished the season with a 30-11 record, and no doubt has his sights on returning to the championship round next season.
Meanwhile, back to Friday’s early rounds.
Braden Smith ran into Lyons’ Oran Huff in the quarterfinals. The Lyons wrestler proved to be outstanding, pinning Smith in the first round. Huff went on to win his second straight 126-pound title, beating two-time 120-pound 2A champion Trey Geyer of Cedaredge for the title, Saturday night. (Smith might need to find a new weight class as both Huff and Geyer return next season.)
Yuma had six wrestlers in the consolation first round that began right after the quarterfinals. The Indians had a good run, as four of the six came away victorious.
It began with John Smith, a sophomore, dominating his way to a 5-0 decision over Hayden’s Sabyn Hager.
Senior Alec Holtorf also had a good run against Mancos Ayden Mathews at 120, getting the lead in the first period before finally getting the win by fall in the third.
Sophomore Yahir Trejo, who had lost by technical fall on Thursday, won an exciting 6-3 decision over Dolores Huerta’s Tim De La Cruz in the first round of consolation.
Lynch , who was pinned in the first round of his preliminary match, was dominant in his consolation match, getting a pin of John Mall’s Wyatt Vigial in the second period.
The only Yuma wrestlers to get eliminated without a win were Joey Ross at 145 and Lars Sims at 285.

Ross ran into eventual four-time state champion Wesley VanMatre of John Mall in the first round, gettting pinned in the first period. (VanMatre ended up being one of four four-time state champions crowned at the 2020 state tournament.) However, Ross then ran into a tough time against County Line’ Aiden Michael in the first round of consolation, losing by pin in the second period.
Lars Sims went out after two matches at 285. The big sophomore was pinned in the third period of his first match against Ignacio’s Randy Herrera. However, he was dominating his consolation match against County Line’s Chase Stolzenberger, leading 5-0 in the second period, when he somehow ended up on his back and was pinned at the 3:43 mark.
Yuma came back with a good run later Friday.
Besides Brophy’s semifinal win, Trejo pulled out a fun 7-5 decision over Buena Vista’s Chris DeLuca at 152, B. Smith earned a 14-6 major decision over Gilpin County’s Kameron Brewery at 126, and Lynch won 6-1 over Buena Vista’s Jim Gabriel.
Holtorf saw his high school career come to an end with a 10-2 decision to Highland’s Logan Lewis, J. Smith lost a tight 3-1 decision to Sedgwick County/Fleming’s Marco Martinez at 113.
That still left four Yuma wrestlers in the running for a medal entering Saturday.
However, B. Smith was knocked out in the third round of consolation with a 9-0 loss to Sedgwick County/Fleming’s Hayden Burr, and Trejo losing 7-0 to Hector Flores of Highland.
Lynch, however, kept it rolling, The senior earned a 6-1 decision over Buena Vista’s Jim Gabriel in the third round of consolation. He ran into Wiggins’ Devin Harshman in the consolation semifinals, giving up points in the final period of a 6-2 loss.
However, he rebounded to dominate his fifth-place match against Hotchkiss’ Justin Mattison, earning a 13-2 major decision.
Coach Lynch noted that the wrestler Lynch did not take up the sport until junior high, then went out for basketball his freshman year before returning to wresting full time as a sophomore.
“That was exciting,” coach Lynch said.
The coach noted that the other 18 wrestlers on the team, as well as an extensive coaching staff, played a role in the Yuma wresters’ success this season.
“We took eight kids, so the other 18 other kids were a big part of this,” he said. “You don’t have success without competition in the room each day. We also had three volunteer coaches who were there every day, along with our paid coaches, working each day to make all our wrestlers better.”