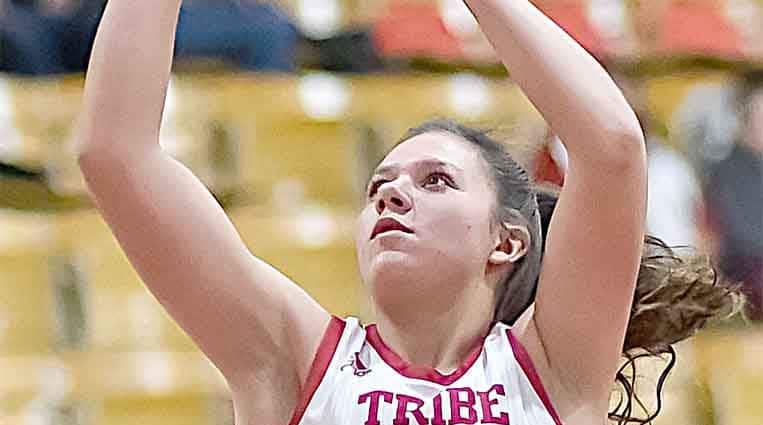 Yuma girls get SedgCo in semifinals

It is time to get on a roll for the Yuma High School girls basketball team.
The Indians enter the postseason as the second seed in the Class 2A District 2 Tournament. That has earned them a bye into Friday’s semifinals in Sterling, while the third through sixth seeds battled it out in the first round, Tuesday night.

Yuma will play third-seed Sedgwick County, which knocked off sixth-seed Akron, at 6 p.m. in the Bank of Colorado Events Center on the Northeastern Junior College campus. Top-seed Holyoke gets the semifinals going against fourth-seed Wray at 3 p.m. The Eagles ran past fifth-seed Wiggins on Tuesday.
Friday’s winners play in the championship game Saturday at 7 p.m., while the losers meet for third place at 4.
“Everyone’s 0-0 at this point in the season,” head coach Bob Rahm said.
The Indians have earned a berth into next week’s regionals, which will be hosted by the district winners.
Despite being No. 25 in the Rating Percentage Index, the Indians would host a four-team regional if they somehow win another district title.
Holyoke is the prohibitive favorite entering district, going 8-0 in league play, sporting an 18-1 overall record, and sitting at No. 2 in the Rating Percentage Index. Wray, 14-6, is 14th in the RPI, and Sedgwick County, 15-5, is 16th. The RPI will be used to determine the regional seeding.
Yuma enters the postseason with a 9-10 record after splitting its last two games of the regular season, both home contests against the Phillips County schools.
The Indians first hosted Holyoke for a non-league game, falling behind 17-2 in the first quarter. Yuma never really could get going offensively, having 10 points at halftime, and finishing with 20 in a 47-20 loss.

Yuma shot 23 percent, while Holyoke hit at a 40-percent clip.
Rahm noted the Indians have had their offensive struggles at times throughout the season, reflected in their 9-10 record.
“We’re like my work truck,” Rahm said. “With the bare tires, I have a hard time getting around in the ice and snow. We just haven’t been able to get any footing. We’ve just been spinning in place at times.”
Ema Richardson had eight points and two rebounds, Reagan Nolin six points, four rebounds and three assists, Meidi Reyes three points and two rebounds, Elle Roth two points and six rebounds, Lea Richardson one point and four rebounds, Lainey Mekelburg two rebounds, and Sam Wells and Taylor Law one rebound each.
Then there are other times when the Indians get rolling offensively and look like a contender — such as the next evening in their 47-26 league win over Haxtun in the regular season finale.
They turned the tables from the previous day, this time running out to a 17-3 lead over the Fightin’ Bulldogs. They led 26-7 at halftime, and cruised from there to victory, finishing 6-2 in the Lower Platte Activities Association.
Nolin knocked down three 3-pointers while finishing with 18 points, seven steals and five rebounds, E. Richardson 16 points, five rebounds and three steals, Mekelburg four points, three rebounds and two assists, Reyes four points, three assists and three steals, Roth three points, two rebounds and two assists, L. Richardson two points, three rebounds and two assists, Law two assists and Kelly Gardner two rebounds.
“We just have to play well at the right time,” Rahm said. “Hopefully, we’ll put it all together these next couple of weeks.”