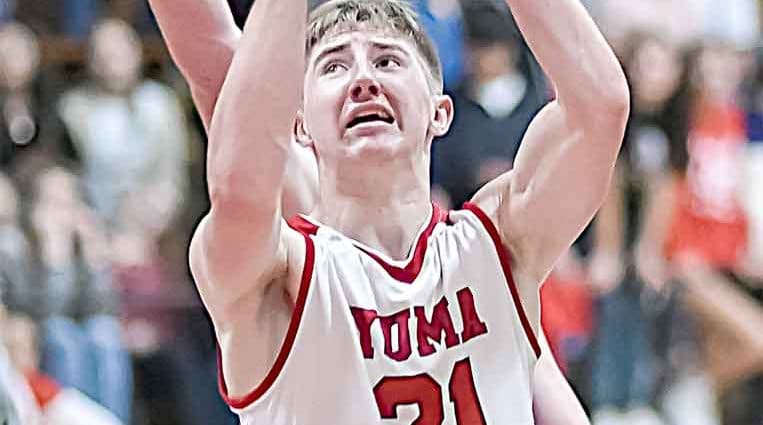 It is tournament time.
“This is the best time of the year,” Yuma boys head coach Dave Sheffield said. “Tournaments are so cool, anyone can win.”

The Indians are the favorites to win the Class 2A District 2 Tournament this week. They enter as the No. 1 seed after going 8-0 in Lower Platte Activities Association play, and are 17-2 overall.
They won their third straight LPAA title, going 24-0 in league play the past three seasons.
“The first goal every year is to win league, and they took care of that,” Sheffield said. “Twenty-four straight is a testament to our players doing a great job adjusting to what the league throws at them.”

Yuma has a bye into Friday’s semifinals at Northeastern Junior College in Sterling. The Indians will play at 4:30 p.m. against fourth-seed Holyoke, which held off fifth-seed Wiggins in the first round this past Tuesday night.
Second-seed Sedgwick County also had a first-round bye, and will play third-seed Wray at 8:30 p.m. The Eagles advanced with a win over sixth-seed Akron on Tuesday.
Friday’s winners will play for the championship at 8:30 p.m. Saturday, while the losers will play for third place at 5:30 p.m.
All four semifinalists will advance to regional next week.
Yuma is aiming for its third straight district title, which also would mean getting to host a four-team regional. The Indians are No. 3 in the 2A Rating Percentage Index, and would be set up with a very favorable regional if they can claim another district championship — though no doubt Sedgwick County and Wray would dearly love to prevent that.
Yuma closed out the regular season last week with home games against the Phillips County schools.
First up was a non-league contest with Holyoke, with the Indians cruising to a 49-31 win.
The game started slowly, with Yuma leading 6-5 after the first quarter. However, the Indians opened the second with an 11-2 run. Chase McCreath, Rolando Caraveo and Clay Robinson all hit 3-pointers as the Indians built a 23-8 lead.
However, Holyoke cut into the deficit by scoring the last five points to get within 12, 27-15, at halftime.
Yuma, though, turned it on again at the start of the third as treys by Cade Morton and Robinson helped push the lead to 35-15. Holyoke never got closer than 15 points the rest of the game.
Robinson had a double-double with 14 points and 13 rebounds, Javier Gamboa 12 points and two steals, McCreath nine points and six rebounds, Morton seven points and four steals, Caraveo five points and two rebounds, Creighton Eyring two points and two steals, Jonathan Rascon three rebounds, and Beau Tate and Bryson Castillo one rebound each.
The Indians closed out the regular season Friday night with a 61-40 win in a league game against Class 1A Haxtun, which is the top seed in its District 5 Tournament.
Since it was Parents Night, all five seniors got the starting nod against Haxtun — McCreath, Caraveo, Rascon, Eyring and Preston Blach. Rascon, Caraveo and McCreath made the first baskets of the game as the Indians ran out to a 14-6 lead.
The Fightin’ Bulldogs have a fairly young lineup, but are a good team and pulled to within 16-14 early in the second quarter. It stayed close late into the third quarter with Yuma leading just 32-29.
However, the Indians finally took control with an 18-4 run that spanned the last part of the third and the first minutes of the fourth.
The seniors all got back on the floor together late in the game, and helped push the final margin above 20.
McCreath had a double-double with 20 points and 12 rebounds, along with four assists, Robinson had 14 points, five rebounds and five assists, Caraveo nine points and three steals, Morton six points and three assists, Rascon four points, five rebounds and three assists, Eyring four points, Tate two points and four rebounds, Gamboa two points, and Blach two rebounds.