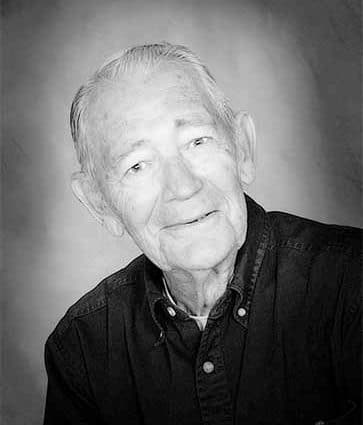 Longtime Yuma, Colorado resident, and a short time resident of Goodland KS, Douglas Lee Sheldon passed away on Feb 28, 2020 at Grace Manner in Burlington, CO. He was 88 years old.
Douglas Lee Sheldon was born on December 25th, 1931 in Ogallala Nebraska to Marvel and Wallace (Slim) Sheldon.
He graduated from Ogallala High School in 1948. Shortly after graduation, he attended FBI school in Washington D.C.
During Doug’s Military years he became a Mess Sgt. Chef in the Army where he, oversaw meals for over 1000 men and the troops train meals from Illinois to California. This set the skills for him to give people his opinion for their cooking skills, no matter what restaurant he went to. Following he continued his service in the National Guards.
On October 9, 1954 he married Betty Lou (Rutter) Sheldon in Raton, New Mexico. They were married 57 yrs.
After marriage, they lived in Ogallala, NE where their beloved daughter, Penny Lynn was born. They moved to Pendleton, Oregon where their first son Kim Douglas was born in September 1957. They moved to Lewistown Montana where the second son was born, Dirk Allen in September 1958. They moved to Burlington, Colorado where their last child, Tadd Darrin was born Feb 3, 1965. After he was born Mom told Dad she wasn’t moving ever again. They went on to move at least 30 more times.
Doug was skilled in many areas. He was reliable and hardworking which led to many career opportunities. He primarily worked in agriculture as a logger, farm hand, and grain elevator operator. He also drove a semi for Mayflower Moving Co, built military bases, and was a golf cart mechanic.
Even after Betty Lou had talked to Doug about not moving again, the year 1990 came upon them they moved to Yuma, Colorado. In Yuma is where they Doug received a job at the Kelandy Center where Doug operated a woodshop teaching the disabled. Doug loved working with his hands. There wasn’t a piece of machinery he couldn’t operate or project he couldn’t build.
During their time in Burlington CO, they sponsored over 30 foster kids.
Doug was a huge fan of the Nebraska Cornhuskers and the Denver Broncos, and could cut a rug dancing the jitter bug with Betty Lou, in the kitchen. Doug loved fishing, hunting and camping with the family.
Douglas is preceded in death by his parents Marvel and Wallace (Slim) Sheldon, sister Sharon Nemcek and wife Betty Lou. Brother in law Leo Rutter and one Great granddaughter Giovanna Alexander.
He is survived by his brother; David Sheldon (Linda) of Ogallala, Nebraska, his daughter; Penny Helderman (Robert) of Kanorado Kansas, sons Kim Sheldon (Lolli) of Colorado Spring Colorado, Dirk Sheldon (Pam) of Goodland Kansas, and Tadd Sheldon of Denver CO.
Grand children: Monta (Gail) McCauley, Blake (Amber) Helderman, Chelsea (Shawn) Myers, Megan (Jeremy) Kemp, Stephine Sheldon, Amber Alexander, Adam and Aaron Alexander, and Tanner Sheldon.
Great Grandchildren: Dezerea and Brett Kaza, Preston and Kaprice Helderman. Jackson, Ember and Pierce Kemp and Sebastian Myers. Anthony, Bonnie, Sophia, Bella.
Great Great Grandchild, Xander Kaza and Saoirse Alexander.
Along with many nieces and nephews.
Funeral services for Doug will be held on Wednesday, March 4, 2020 at 10:30 AM MT at Koons-Russell Funeral Home in Goodland with Pastor Don Smith officiating. Burial will follow in the Goodland Cemetery.
Visitation will be held on Tuesday, March 3, 2020 from 6:00 to 8:00 PM MT at Koons-Russell Funeral Home in Goodland.
Memorial contributions may be designated to the Grace Manor Care Center in Burlington and may be left at the services or mailed to Koons-Russell Funeral Home, 211 N. Main Ave., Goodland, KS 67735.
Online condolences for the family may be left at www.koonsrussellfuneralhome.com.
Services have been entrusted to Koons-Russell Funeral Home in Goodland.