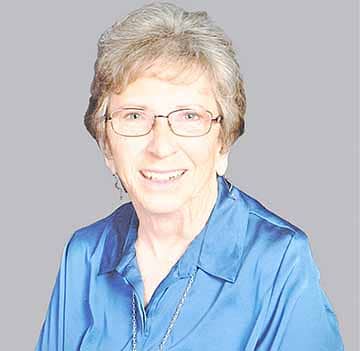 Connie Rae (Twiss) Corman was born on December 11, 1944 in Wray, Colorado. She was the second of five children born to Howard B. and Mary Faye (Funk) Twiss. Connie left this world on November 10th, 2020 at North Colorado Medical Center in Greeley, CO.
Connie was raised on the family farm southwest of Otis, where she attended Ashland school for grades 1-8. She finished her secondary education at Otis High School, graduating in 1962. After graduating, she moved to Denver for a year, and graduated from Patricia Steven’s Business School.
While in high school, she met the man she would later marry. Connie married Edward Raymond Corman on May 3, 1964 at the Methodist Church in Akron, CO. Ed was employed, at the time, at Ray Corman and Son, Imp. in Yuma, CO, where they made their first home. Two years later, a son, Darin Raymond was born on May 14, 1966. Two years, two months, and two days later, a daughter, Rhonda Rae was born on July 16, 1968.
In 1972, Ed and Connie purchased a farm south east of Otis. This is the home they shared from that time on. Ed and Connie worked side by side to build the family farm that currently operates today. Connie was a home and co-farm manager until her passing. She operated equipment and worked as the farm’s accountant.
Connie was a strong and capable woman. In her sixties, she started hauling gravel for gas well construction. She did this for about 2 or 3 years, putting approximately 100,000 miles on her Kenworth and belly dump trailer.
She was an active member of St. Paul Lutheran Church in Otis and enjoyed attending services with her family.
In 2013, Connie was diagnosed with Myasthenia Gravis, an auto-immune muscular disorder. Treatment included five-day stints in the hospital for plasma exchanges and later she would go into the hospital for a form of chemotherapy. Connie fought this disease like the trooper that she was, with stubborn fortitude, strength, and resolve.
Preceding her in death were her parents, Howard and Mary Twiss and her in-laws Raymond and Leota Corman. She is survived by her husband of 56 years, Edward; her son, Darin (Michelle) of Otis; and her daughter Rhonda (Carol) of Greeley. She is also survived by her grandchildren Derek (Noelle) Corman; Dana (Devin) McCall; and Emily (James) McGrath; her great grandchildren (who fondly called her GG Connie), Colt Corman, Jace Corman, Cash Corman, Ryker Corman, Allison McCall, Kaitlyn McCall, Tyson McCall, Carter McGrath, and Wesley McGrath, all of Otis. Connie is also survived by her siblings Janice (Ron) Shook of Akron; Linda (Jerry) Kuntz of Sterling; Rhonda (Tim) Kuntz of Lone Star; and Thomas (Shirl) Twiss of Otis; along with many nieces, nephews and great nieces and nephews.
Memorial Service will be held on Thursday, November 19, 2020 at 10:30 a.m. at St. Paul Lutheran Church in Otis. Memorial contributions can be made to St. Paul Lutheran, Otis, CO. Baucke Funeral Home directed the services.