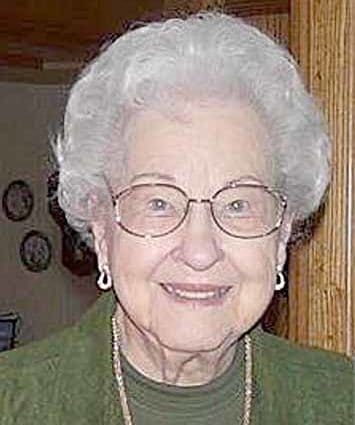 Born January 19, 1925, Jean Chrismer was the second of three children born to rancher and rodeo-enthusiast Wilbur J. Chrismer and his wife Della Mae (Nabb). Their home was on Cedar Street in Yuma, Colorado, just a block south of her grandmother and two blocks south of the municipal park with the swimming pool that was built into a manmade hill. In school Jean played violin in the orchestra and sang in the choir.
In 1942, Jean married Bernard E. Balderston. For the next 20 years she was a homemaker and farmer’s wife, enjoying gardening and the Prairie View Ladies’ Aide activities. She and Bernie played cards and board games with the neighbors. Four children were born to this union: all attended school at Red Willow. Jean also worked for a short time at a photography studio in town, and was employed seasonally at the Gisi turkey processing plant.
In 1962, the family moved into town on Albany Street, near the high school. While Bernie was a partner in B&B Implements (Case dealership) with his double cousin, Kenneth Briscoe, Jean began working at the Farmers’ State Bank. During her 28 years at the bank, she was a teller and eventually became the bookkeeper.
Jean was a member of the Okihi Club and of P.E.O. She belonged to the First Presbyterian Church in Yuma, which her great-great-aunt Mary L. Pratt helped establish. Jean enjoyed antiquing, shopping at estate sales, playing bridge and reading. She collected several types of things, but especially loved tealeaf ironstone which her grandmother had used as everyday dishes.
In 1988, after being widowed for nearly 13 years, Jean married Perry Crowley, who had moved back to town after retiring from a career in Nevada. He had been a childhood playmate of Jean and her older sister. In 1995, the couple moved to Bartlesville, Oklahoma, near Jean’s middle daughter where she continued her favorite pasttimes.
Jean Chrismer Balderston Crowley passed away in Bartlesville, Oklahoma on October 24, 2020 at the age of 95.
Jean was predeceased by her parents, by her siblings Jane Hale and William Chrismer, two husbands, and her son David B. Balderston. Jean is survived by her daughters Barbara (Dan) Fix of Lehi, Utah, Beverly (Ron) Gisi of Bartlesville, Oklahoma, Nancy (Ernest) Alexander of McKinney, Texas, daughter-in-law Susan Balderston of Brush, Colorado, 10 grandchildren, 13 great-grandchildren, sister-in-law Carmen Chrismer, a host of nieces and nephews, four stepchildren and their extended family members. Graveside service to be held in Yuma at a later date.