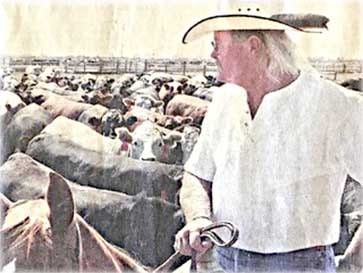 Danny Kenneth Cumley was born March 15, 1948, to his parents Darlene (Lush) and Floyd Kenneth Cumley (Bud) in Wray, Colorado. Danny spent his childhood in Wray.
After he attended High School, Danny joined the Navy in June 1965. While in the Navy he served overseas during the Vietnam War and was honorably discharged from the Navy in March 1969.
He married Melody (Boyes) on May 30, 1969, in Bell Gardens, California and to this union were born two sons, Kevin Kenneth, and Casey Austin.
Danny loved working as a cowboy riding his horses and tending to the cattle. He was a lifetime member of The VFW and American Legion.
His favorite pastime was attending horse sales and conducting business as D&M Saddlery selling his tack.
Danny enjoyed watching his grandchildren ride horses. When they were small, it was not uncommon for the grandkids to be with him at the horse sale. A lot of the time, he would put the kids to work helping sell his tack or riding the horses through the ring.
He would spend his days “at the office,” playing cards. When he wasn’t at the office, he enjoyed sitting at home with the ever-present Western Channel or Rodeos to keep him entertained.
Danny loved to sit with his family and recall stories from the past and he cherished how his family gave him the biggest laughs and created his favorite memories.
Danny was a loving husband to Melody, and a strong father to his boys. He was a solid rock to his mother Darlene. His grandchildren would describe him as a prankster with a wicked sense of humor.
Danny passed away August 11, 2021, from aggressive cancer. He was surrounded by his family at his home in Wray, Colorado.
He is survived by his wife, Melody Cumley and his children, Kevin (Georgette) Cumley, Casey Cumley (Ginger), his mother, Darlene Cumley and his grandchildren, Jasz and Erik.
He is also survived by his nieces and nephews whom he loved dearly.
Danny was preceded in death by his grandmother, Eleanor Lush, his father, Floyd Cumley (Bud), and his brother, Denny Cumley.
Danny will be deeply missed, never forgotten, and loved by all.
Cremation was requested with no services. Schmidt-Jones Funeral Home was in charge of arrangements.