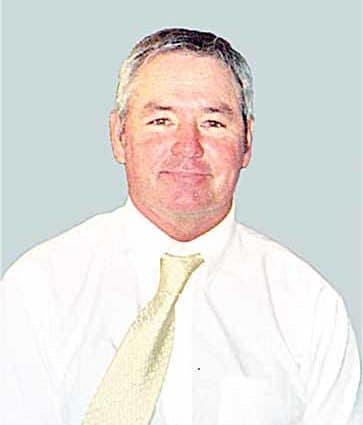 Dennis Lee Baucke, a man of faith, strength and courage passed away on October 23rd, 2020 at the Medical Center of the Rockies in Loveland, CO with his family by his side.
Dennis was born to Edwin and Adaline Baucke on October 4th, 1955 in Yuma, Colorado. He was the second of three children and the only son. He grew up north of Yuma where he helped his family with different responsibilities on the farm. Those included; collecting chicken eggs, raising hogs, and he helped with the day to day to operations. This is where his love for farming inspired his passion to farm throughout his life.
He attended the Yuma Schools and graduated from Yuma High School in 1974. Throughout his school years he was very involved in 4-H and won the Yuma County Fair hog show and won a state tractor driving competition. He loved sports and was involved in football and basketball in Jr. High and continued his love for those games in high school. He was named to the All Conference Football Team in 1973 and helped his team make it to the state championship game. He was involved in FFA throughout high-school. Throughout high-school, he continued to help his parents on the family farm. Dennis also enjoyed spending time with cousins throughout the years.
After graduating from Yuma High School, he attended Colorado State University for two and a half years and was planning on graduating with a degree in Agriculture. He also worked on the CSU livestock farm. He met the love of his life, Kim Flores, while attending CSU and Kim attended UNC. Dennis and Kim met through Dennis’ cousin, Dan Baucke and their mutual friend, Jan (Witte) Baucke. Dennis and Kim hit it off from the start and made special memories together and with friends throughout their college years.
Dennis returned back to Yuma in 1977 and worked for various employers including: Gary Koenig as an aviation flagger; Bill Wenger selling steel buildings and grain bins and he continued helping with the farm operation.
Dennis and Kim continued their relationship and were married August 5, 1978 in Wray, Colorado at Calvary Lutheran Church. They had many friends and family there to share their special day. After getting married, Dennis and Kim resided in Yuma, CO and through this union they had four children together; Marc, Katie, Benjamin, and Samuel.
Dennis worked for Fix Equipment selling John Deere equipment for several years and began adding to the family farm production while working for Don McCasland.
Dennis served on the Equity Oil Co-op Board and served as an elder at St. John’s Lutheran Church.
In 1987, Dennis was diagnosed with Multiple Sclerosis and was only given two years to live which he fought to overcome everyday through his strong faith, strength, courage and passion for life and with the love of Kim and his family. Throughout Dennis’ lifetime, he never let the MS define him.
In April of 1992, Dennis and family moved to their remodeled home north of Yuma. They enjoyed country living and were so happy to be in the family home. This is when Ed transitioned ownership of the farm to Dennis. From there, Dennis was able to start farming on his own.
In October of 1992, Kim had passed away due to complications of Crohn’s disease. This left Dennis with Marc age 13, Katie age 10, Benjamin age 2, and Samuel 19 days old. Dennis and children were supported by family and friends throughout this difficult time. Dennis continued to farm with his dad throughout the years and his children began to help with the day to day farming operations.
In 2008, Dennis formed a farming partnership with his two sons, Marc and Benjamin. As the MS progressed, Dennis remained very involved in the farming operation up until the time of his death. Dennis enjoyed spending time with his grandkids and was very proud of each of them and his children. He enjoyed attending his grandchildren’s sporting events and activities, and he loved watching them grow up.
Dennis is preceded in death by his wife, Kim; parents, Edwin and Adaline Baucke; father and mother in law, Burnell and Gladys Flores; brother in law, Marcus Flores and sister in law, Nancy Flores.
He leaves to mourn; his son and daughter in law, Marc and Anabel and grandchildren, David, Derek, Andre, Silas, and Addie. Daughter and son in law, Katie and Justin Hebert and grandchildren, Kimbry and Hudson. Son, Benjamin and girlfriend, Mackenzie Twiss. Son and daughter in law, Sam and Jasmine and grandchildren, Jaxton, Stryker, and Brexlynn. Sisters and brother in laws, Deb and Don Godsey, Diane and Roger Schenk. Sister in law and husband, Kate and Walt Mayer. Brother in law, Mike Flores and numerous cousins, nieces and nephews and many others who were inspired by him.
A celebration of life will be Saturday November 14, 2020 at 10:00 a.m. St. John’s Lutheran Church with reverend Dennis FitzPatrick officiating. Inurnment at the Yuma Cemetery.
“I am honored by the tears you shed. Now I pray for a fond smile or gentle laugh as thoughts turn to me. I had taken all the love and memories with me. And when your time too is at hand, I will be here to greet you at the door of our Father’s eternal celebration.” Author: Unknown.