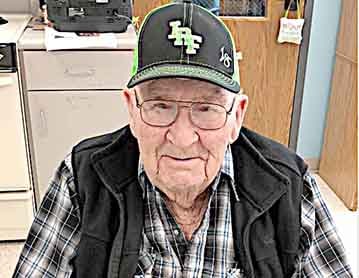 Eldon Dee “Jack” Adams was born on June 22, 1927 at his grandparents’ home in Bear River, Utah, to Delos Eldon and Angeline Marie Christensen Adams, the oldest of five children. The family lived in East Garland, Utah, moving to Tremonton, Utah when he was five years old. He graduated from Bear River High School in 1945, joining the Navy in May of 1945. On New Year’s Eve, 1946, the ship was moored two miles from Okinawa. Some officers sent him to Okinawa in a small boat to get some “supplies.” When he returned with the whiskey and Coca-Cola that he was sent after, they didn’t even give him a bottle of pop! He got out of the Navy on August 8, 1946 in Boston, Massachusetts. He rode the train to Aberdeen, South Dakota and from there to Faulkton to visit his Navy buddy, Vernon Lehman. Dad said that Vernon had never told him that he had a sister. “When I got to Faulkton and met Lu, I never left!” They were married November 16, 1946. Jack and Lu owned a café in Faulkton for a couple of years, then Jack went to work for Hugh Faulkner, 8 miles west of Faulkton, for 12 years. In 1960, they bought the Woodland Hills Lodge in Woodland Park, Colorado, fulfilling a life-long dream of Lu’s, and remained there until 1963 when they moved to Yuma, Colorado where Jack went to work for Seedorf Brothers. He worked there for 10 years, then managed the Jim Price Ranch for 16 years. After moving back to town, he went to work for the Water Board, finally retiring in 2004. During his time with the Water Board, he served as President of the 15 state Water Board, which covered states from Montana to Mississippi. Jack was one of the two remaining charter members on the board at the Irrigation Research Farm, which he was very proud of.
Jack lived the last three years and three months of his life at Hillcrest Care Center and the Towers in Wray, Colorado. He loved it there, sharing his humor, singing, and yodeling with anyone that would listen.
Jack is survived by his children, Scott (Lyndia Loppe) of Yuma, Owen (Mary) of Broken Arrow, Oklahoma, Virginia “Gini” of Yuma, Darby (dalette) of Lubbock, Texas, and Kim (Leo) Lopez of El Paso, Texas, 9 grandkids, 20 great-grandkids, and 6 great-great grandkids. He was preceded in death by his wife, Lu, son Val Dee, grandson T.J. Veliz, his parents and all of his siblings.
Jack was a life-long horseman and cattleman. He was one of the hardest working, toughest men with an extreme amount of integrity. To Jack, there was no gray area, it was either right or it was wrong.
A memorial service will be held at the Veterans Park on Friday, May 28, at 2 p.m. with full military honors. A reception will follow at Daylight Donuts. His ashes will be taken to Wecota, South Dakota, where they will be placed with Lu.