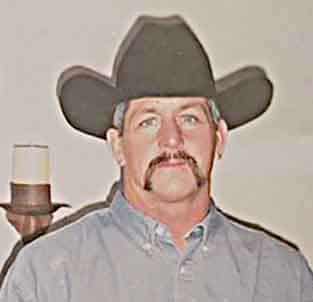 Kelly Paul Chamberlain was born August 13, 1956 in Wray, CO, to Bernadel Rita and Arthur
Mason Chamberlain, Jr.
Kelly rode his last rodeo and laid his hat down on May 8, 2021 in the Greeley Hospital after a
long life battle with diabetes.
Kelly was baptized and confirmed at Saint Andrew’s Catholic Church in Wray, Co.
Kelly attended Elementary through High School in the Wray School system. He graduated in the
Class of 1975. Some of Kelly’s highlights during his high school years were: 4 year wrestling
team letterman. All-American Wrestler his Senior Year and State- Runner Up under Coach Bob
Smith. He was in the W-Club, FFA, FCA, Library Club, and the 250 Weight Lifting Club. He
proudly wore #50 as the center of his WHS Football Team and Kelly was involved with 4-H since
his youth.
Kelly fell head over heels for horses at a young age. Some he “borrowed” and many he won on!
His “All Around Teenage Cowboy” saddle was one he was most proud of. He was always
involved in rodeo and gymkhana‘s throughout high school. Kelly was on the rodeo team at
Casper College in Wyoming in 1976-77. Kelly was among the best bull dogger’s, bucking bronc
rider’s and bull rider‘s. Many would agree that Kelly lived life fast and to the fullest!
As a youth, he was either climbing the tallest tree, ringing doorbells from rooftops, creating his
version of a firework, roping kids who walk by, getting gored by a bull that kept us in suspense
and him in a pickle!
Kelly shined escorting newlyweds behind his horse (Otis) and buggy! Otis and Kelly became
regulars at the Yuma County Fair & the Wray Days Parades carrying family, friends or cowboys
down Main Street along with his loyal dog Mikey.
He worked for many cowhands such as; Quiggle Cattle Co., Ceres, Des Brophy, Mill Iron
Diamond, Lee Lancaster,1256 Feedlot and Ron Fonte. He also worked heavy equipment for
Yuma County, the Conservation Services in Bennett, Co., Recycled Materials out of Denver, Co.
Kelly was always willing to lend a hand whether it was fixing fence, branding, or baling hay.
There was never a job too big or too difficult for this tough ole cowboy.
He will always be remembered in the bright red house on Dexter Street waving his Nebraska
Cornhuskers flag!
Kelly was preceded in death by his sister, Jody Lynn Chamberlain, father, Arthur Mason
Chamberlain, Jr., grandparents, Paul and Emma Gartin, step father, Jack Fisher, brother,
Ronald Mason Chamberlain, mother, Bernadel Rita Fisher, sister, Debra Ann Stull.
Kelly is survived by his sister, Carmen Jane Hochevar and husband Brian. Sister-in-law, Dixie
Rae Chamberlain. Kelly was the proud uncle to 3 nieces, Brittany Hochevar-Hart, Angela
DePue, Ashley Gustafson and 6 nephews Trae and Travis Stull, Mason and Tyler Chamberlain,
Luke and Dylan Hochevar and their respected families.
Funeral mass was held at the St. Andrews Catholic Church in Wray, May 14, 2021. A rosary
was said on May 13, 2021 at Schmidt/Jones Funeral Home at 6:30 p.m.
Memorials for Kelly may be made to The Learning Center in care of Wray State Bank.
A special thank you to:
Crystal Nelson, for her unconditional love and care for Kelly.
The Bee Hive, Sterling, Co
Schmidt-Jones Funeral Home