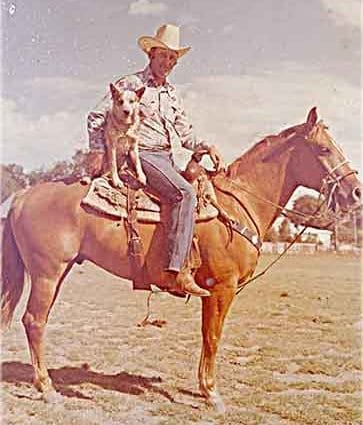 Everett Dewayne Wiltfang was born to Edward and Emma (Schildmeier) Wiltfang on August 2, 1938 in Wray, Colorado. He entered into heaven on August 11, 2020 at the age of 82 in Cle Elum, WA. Everett was raised on the farm and ranch homestead north of Wray, where he lived with his parents and one sister Carol.
In 1966, Everett met Gerald Dean (Jerry) Martin and her four young children. They married and Everett adopted his first four children, Tamara Jean, Stephen Charles, Julie Lynn and Rhonda Kay. Sadly in 1970 Everett and the children lost Jerry to cancer. In 1971, Everett met and married Beverly Jean Phillips and again adopted two more sons, Jason Mark and Justin Zane.
The family lived south of Brush on a feedlot where Everett was the head cowboy. Everyone learned to ride a horse right alongside their dad. In 1975, Everett moved the family to Wray, Colorado. Here, Everett worked for Fred and Charlene Baker on their farm and for Wray livestock sale barn for many years. He also ran his own herd of cattle and helped his father with his farm and ranch operation. In 2012 Everett moved to Maricopa, AZ and worked on a feedlot as a cowboy until he retired due to health reasons. He moved to Cle Elum, WA to live beside Steve in 2019.
Everett’s passion was always horses. He was happiest in a saddle. We spent many days and nights in an arena whether it be practicing or competing. He taught not only his children, but many others how to ride and rope.
Everett leaves behind many loved ones to carry on his memory and to celebrate his life.
Wife, Beverly Jean Wiltfang of Wray.
Tammy and husband Doug Rogers of Burlington, CO, their three children, Michael, Marcus and Brooke along with two great grandchildren.
Steve and wife Deb Wiltfang of Cle Elum, WA. Steve’s children, Shannon husband Will Moore and three great grandchildren, Stephanie Wiltfang and Freddie Soennichsen and two great grandchildren, Chance and Sophie Wiltfang, Chad Wiltfang and Jacob Wiltfang.
Julie Meek of Wray, CO, her children Nick Bliven and Micki and Scott Cantrell with one great grandchild.
Rhonda Mekelburg and Scott Jones Yuma, CO, children Cody Mekelburg, Alex Mekelburg and fiance Jakob Burke.
Jason and wife Jody Wiltfang of Wray, CO, their children Amanda and Larry Koeller and three great grandchildren, Travis and Chasidy Wiltfang and two great grandchildren and Jordlynn Wiltfang.
Justin Wiltfang of Wray, CO, and his daughters, Shania, Bailey and Autumn Wiltfang.
Numerous family and friends, too many to list.
Family and friends are planning a celebration of Everett’s life to be announced at a later date. At Everett’s request there will be no funeral, just the celebration.