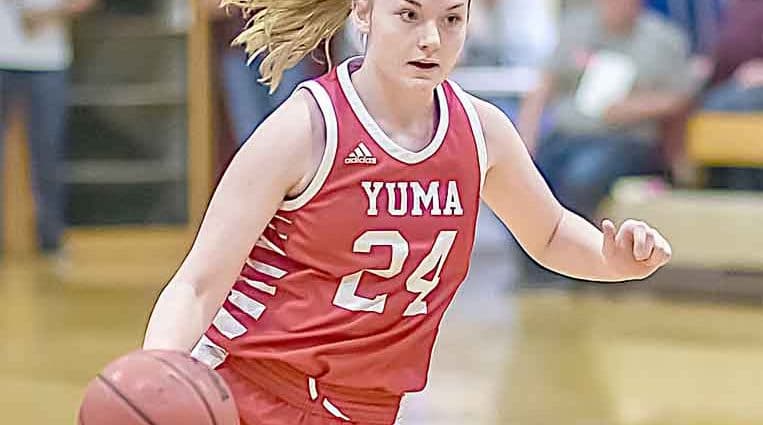 Girls trying to go above .500, sitting pretty for district

Yuma High School’s girls basketball team has been up and down all season, but saw some things fall their way over the past week.
The Indians enter Saturday’s non-league home game against Sterling 8-8 overall, and 4-2 in Lower Platte Activities Association, and 3-2 against the LPAA’s other Class 2A teams. (The MaxPreps numbers are inaccurate as there are only five games against 2A LPAA teams.) The Indians’ remaining LPAA game is next Friday at home against 1A Haxtun. They host 3A Sterling in a non-league game Saturday afternoon in The Pit, and also have a non-league home game with Holyoke on Thursday.

At 3-2 against the LPAA’s 2A teams, Yuma was looking good for a top-three finish among those schools, and being on the opposite side of the bracket from No. 1 Holyoke in the district tournament later this month.
However, it looks really good now following a loss by rival Wray to Sedgwick County last Saturday, leaving Yuma and the Cougars at 3-2 among 2A LPAA teams. Wray currently is 1-2 against the 2A teams, but will be favored to beat Wiggins and Akron over the next week, which would leave the Eagles at 3-2.
If Wray somehow stumbles in one of those games, Yuma has second place clinched by virtue of its win over Sedgwick County.
Well, it turns out Yuma has second even in the event of a three-way tie for second. Coach Bob Rahm reported Tuesday morning that the three-way tie-breaker has been figured out. The first tie-breaker is point differential among the three teams’ games against each other, with Yuma at plus-3, Wray plus-1 and Sedgwick County minus-4. That gives Yuma the second seed for district. The next tie-breaker between the remaining two is head-to-head, and Sedgwick County gets that one by beating Wray last Saturday, leaving Wray in fourth and on the opposite side of the bracket from Yuma.
Rahm noted that is no small thing as the Eagles have beat Yuma three times already this season, while Yuma has a convincing win over Sedgwick County.
The Indians also have a good chance of finishing 6-2 in LPAA play, placing second overall behind Holyoke. (All league games count in the race for the league title, but the 1A games are thrown out when determining seeding for district.)
“I feel good about where we’re sitting now,” Rahm said.
The Indians also have a great chance to finish the regular season with a winning record if they continue to play like they did in wins at Merino last Saturday and Thursday night at Caliche, even with a non-league home game against RPI No. 1 Holyoke next Thursday.

The Indians had little trouble Thursday at Caliche, cruising to a 42-10 lead by halftime, eventually winning 57-23. Senior Reagan Nolin made five 3-pointers in the first half. There will be more stats in February 20 Pioneer.
Merino won the LPAA volleyball title last fall, and had an outside chance of topping Holyoke for the basketball regular-season crown until Yuma dashed that possibility last Saturday on the Rams’ home court.
It was a ruthlessly defensive battle in the first half. The Indians led 9-6 after the first quarter, and scored only one basket in the second. However, Taylor Law’s 3-pointer with 33 seconds left was all Yuma needed to lead 12-11 at halftime.
The Tribe got it going in the third as it scored the first 10 points for a 22-11 lead. However, senior leader Reagan Nolin went to the bench with her fourth foul with 1 minute, 32 seconds left, and Merino closed the quarter on a 5-0 run.
Yuma, though, was able to keep its lead between six to eight points through much of the fourth, then sealed the 39-25 win by making seven of eight from the charity stripe during the final two minutes, while Yuma’s defense continued to thwart Merino’s scoring opportunities.
“We have our games where we have trouble scoring, and that was one of them but we still won by 14,” Rahm said. “We played good defense and did the little things, besides making baskets, like outshooting them at the free-throw line and keeping down the turnovers.”
A solid all-around game was led by Ema Richardson finishing with 15 points, making five of seven free throws, along with eight rebounds and three steals. Nolin had 11 points, making all four of her charity-stripe attempts, along with three rebounds. Law made four of five at the stripe, finishing with nine points and three rebounds. Elle Roth had two points, seven rebounds and two steals, Lea Richardson two points, four rebounds, three steals and two assists, Meidi Reyes three rebounds and two assists, and Lainey Mekelburg two rebounds and two assists.
“We’re focusing on the little things to make us successful,” Rahm said.