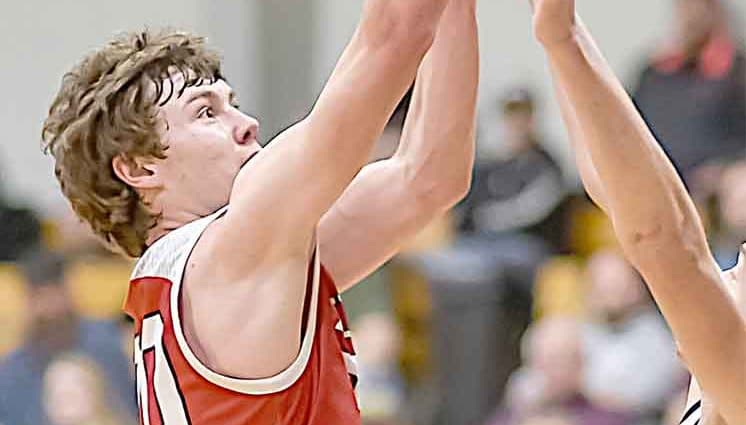 The Yuma High School boys basketball team just keeps grinding out wins.
Strong defense and efficient offensive play have the Indians sitting at 14-2 overall, 7-0 in the Lower Platte Activities Association, heading into the final week of the regular season.

“Our defensive consistency is a large key to what we are doing,” coach Dave Sheffield said. “We have had some stretches where our scoring dips, so we need to rely on our defensive effort. As a whole they have been able to make adjustments in games to what the other team is doing to limit what they are doing.”
They have vaulted from the teens to No. 3 in the Class 2A Rating Percentage Index in recent weeks, setting themselves up for a favorable seeding in regional if they can take care of business the rest of the regular season and in the district tournament.
The two-time 2A defending champions are ranked No. 2 in the 2A Top 10, which is strictly for entertainment purposes as it has no bearing on postseason seeding.
Yuma romped to a 70-35 league win at Caliche, Thursday night, and will go to Byers on Saturday for a rescheduled game that was postponed last Friday due to the snowstorm up west.

Games against the LPAA 1A schools count in the race for the regular-season title, which the Indians can claim for the third straight season with a win next week at home against 1A Haxtun. However, the 1A games are dropped when determining district seeding, with only the games against the other five 2A schools being factored.
In that regard, the Indians already have clinched the top seed for district, having gone 5-0 against Sedgwick County, Wray, Holyoke, Akron and Wiggins. Sedgwick County rallied in the final seconds to beat Wray by two points, last Saturday, securing the second seed, and leaving Wray in the third slot. Holyoke is fourth, Wiggins fifth and Akron sixth.
“We are sitting in a good spot going into the final weeks,” Sheffield said. “We have sealed the No. 1 seed for districts, and we control our fate with respect to winning conference. The RPI will take care of itself, so we just need to take each game as it comes.”
Caliche has been enjoying their best campaign in recent seasons, sitting at 10-6 overall heading into this week. However, the Indians cruised to a win Thursday on the Buffs’ homecourt. Two rotational players were out with injury and illness, and senior center Chase McCreath played with a sore ankle. It mattered little as Sheffield went deep into the bench, playing all 10 who were in uniform, as the Indians controlled play from start to finish.
Stats from the game will be available in the February 20 edition of the Pioneer.
The Indians enjoyed a convincing 53-38 win at Merino, last Saturday.
They led 12-8 after the first quarter, and utilized good hustle around the basket to take a 25-16 lead in the second.
Yuma continued to control the action in the third, and Rolando Caraveo’s 3-pointer from the corner gave the Indians a 32-18 lead, prompting a Merino timeout.
The Indians led 38-21 after the third quarter, and pushed the lead to 20 points early in the fourth.
However, Merino briefly got hot behind the arc (making their only two out of 17 attempts), getting as close as 12, 46-34. The Rams could get no closer, as Yuma held on for the 15-point win.
Yuma shot 42.2 percent, while Merino was at 27.3 percent. Yuma held a 35-21 rebounding advantage, but the teams were even in free-throw shooting, turnovers and assists.
Chase McCreath had a double-double with 17 points and 10 rebounds, along with two assists and two blocks. Clay Robinson had 12 points, seven rebounds and three steals, Jonathan Rascon eight points, six rebounds and four steals, Caraveo seven points and three steals, Javier Gamboa seven points and two rebounds, Creighton Eyring two points, Cade Morton five rebounds and two assists, Bryson Castillo two rebounds and Beau Tate one rebound.