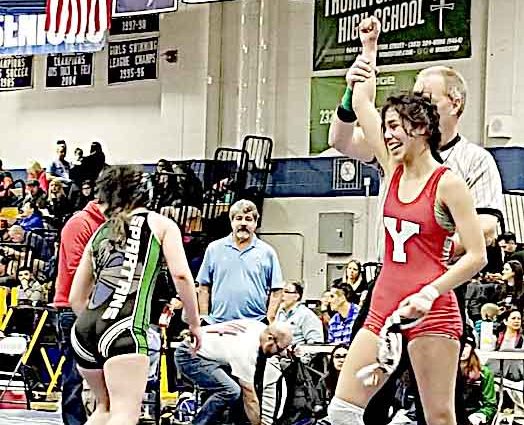 If there was a Class 2A girls wrestling classification, the Yuma High School team would set the standard.
“It’s an all-classification tournament, I hope people understand that,” head coach Rory Lynch said.

Girls wrestling in Colorado moves from the pilot stage to being a full sanctioned sport next year. However, it will remain a one-classification sport for the foreseeable future, despite the great growth the sport has enjoyed recently.
Despite wrestling the girls from the big schools, the Indians still finished 13th out of 54 teams, including 50 that scored at least one point, posting 31 points and two state placers at the 2020 Colorado High Schools Girls State Wrestling Championships, last Saturday at Thornton High School.
“It was exciting,” Lynch said.
State was to be a two-day event as the number of girls wrestlers has grown. However, last Friday’s Front Range snowstorm, which resulted in metro-area schools canceling school, forced the cancellation of of Friday’s three rounds with it all being pushed into one day.
The tournament still was concluded by about 7 p.m. Saturday despite being condensed into one day.
“Thornton did a good job of running it,” Lynch said, adding there is talk of the girls state tournament being incorporated into the boys’ at the Pepsi Center when it is a sanctioned sport next year.
Yuma’s four state wrestlers amassed 31 points to tie for 13th with Skyview.
Among 2A/1A schools, Calhan scored 16 points to place 30th, Nucla nine for 36th, Soroco nine for 44th and Peyton four for 45th with four. Stratton/Liberty was the only other 1A or 2A school with a wrestler at state.
Fatima Duran led the way by placing fourth at 111 pounds. The sophomore reached the semifinals, winning her first match with a 36-second pin and then earning an 8-2 decision over Doherty’s Shayla Valez in the quarterfinals.
She ran into Izzy Resendez of Denver East in the semifinals, and was pinned in the first period.

However, she battled back with a 1-minute pin of Marley Martinez of Nucla in the consolation semifinals, before losing by pin in the second period to Loveland’s Ashley Bankes in the third-place match.
Mia Dischner added to the point total by going 3-3 at 185 pounds to place sixth. The sophomore opened state action by getting pinned in her first match, but then won three straight in the consolation round by fall — pinning Denver East’s Cynara Turner in 1:45, Thornton’s Daysla DeHerrera in 4:03, and Mountain Valley’s Gabi Bukary in 4:16. Dischner then ran out of gas, losing by fall in the consolation semifinals in the third period, and then in the fifth-place match in the first period.
Eva Ruiz, who took up wrestling just this year, won one match at 161, a pin of Northglenn’s Brianna Rodirguez. Her two losses came by 9-5 and 12-6 decisions.
Freshman Ashley Marshall went winless at 105, but her second loss came in overtime, and her first was a third-period pin.
“All but one won a match, and Ashley had two tough matches that went three periods, and one went overtime,” Lynch said.
Now girls wrestling moves into the new frontier as a CHSAA sanctioned sport. Lynch said it will not change anything in regards to the team, but noted that if it grows much more — there were eight this year and all were juniors or younger — there might have to be separate practices next season.
He credited his staff with making this year such a success, as Annsley Brophy, Tyler Korf and Brandon Newton are volunteer coaches but never missed a practice or to help at a tournament, along with paid coaches Lynch, Kyle Newton and CJ Leonhardt.
“They have been a big help,” Lynch said.