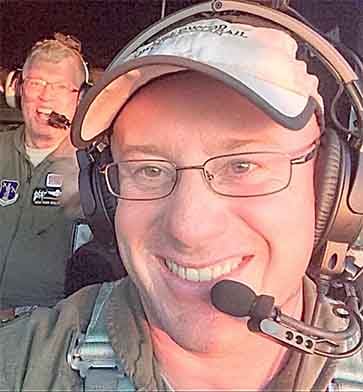 Ian Hermann McBeth was born November 24, 1975 in Aschaffenburg, Bavaria, Germany to William and Anneliese McBeth where his father was stationed with the US Army. The McBeths moved to the United States in 1976, with Ian splitting his early years between his father’s hometown of Gordon, Nebraska and Kansas State University in Manhattan, Kansas before the family settled in Wray, Colorado in 1982.
Ian’s childhood was quintessential (Ian would have hated that word but it means the pure and essential essence of something and really sums up his childhood in a few words. So there Ian) of a small ranching community, fostering a deep love of animals and a reverence for hard work. Ian spent many adolescent summers haying in the Nebraska Sandhills just as his brother, father, grandfather, and great-uncle had before him. Ian loved the hard work, cowboy comradery, and the shared the experience of the Sandhills. As a standout athlete at Wray High School Ian received 11 of 12 varsity letters in football, wrestling, and track. He was a mainstay of the 1993 State Championship Football team on both offense and defense and was a perennial placer in the state track meet in the 1600 and 800 meter races. Ian was known as much for his humor and hijinks as his toughness, determination, and skill, a theme that would follow him throughout his life.
After high school, Ian enrolled at the University of Wyoming in Laramie, WY where he acquired the title “The Instigator”, a nickname that could likely be used in every chapter of his life. While at the university, Ian continued to run track, earning WAC Academic All-Conference; earned several academic honors, graduating with Bachelor’s and Master’s degrees in Rangeland Ecology and Watershed Management; and was the main character in far too many late night antics and adventures. Most significantly, Laramie is where Ian met his best friend, and love of his life, Bowdie Lindzey.
Ian’s love of adventure, appreciation for hard work, and respect for duty led him into military service. Enlisting in the Wyoming Air National Guard in 1996 as a construction specialist, he was later commissioned and served as navigator and then pilot on the C-130 aircraft. In 2013, Ian joined the Montana Air National Guard, becoming a pivotal part of the 120th Airlift Wing’s conversion from F-15 jet aircraft to C-130s. Over his career with the Guard, Ian completed multiple combat deployments including tours in Iraq and Afghanistan. Known to be a patient teacher who held his fellow airmen to his own high standards, he will be most remembered for his incredible competence as a pilot, teacher and evaluator, his incredible humor and the near-constant twinkle in his eye.
Above all else, Ian’s first passion in life was his family. Married over 20 years, he and Bowdie shared three beautiful, clever, and adventurous children. Abigail, Calvin, and Ella were Ian’s pride and joy and loved joining their father on whatever scheme he had cooked up. He prized spending time outside with his children skiing, hiking, camping, geo-caching, and kayaking. Ian helped dream up a long list of extended family adventures with his parents, siblings, nieces, and nephews to the Blackhills, Fort Robinson State Park, Glacier National Park, the Delaware shore, and the Grand Canyon to name a few. “Uncle Ian” was, as always, the main character in every trip’s greatest adventure – whether it was a story of an overwhelming success or epic failure.
Ian passed away January 23, 2020 in New South Wales, Australia while doing what he loved -flying and helping others. Ian’s death has reminded us all of his passion for life, his love of animals and the outdoors, and the incredibly dogged determination with which he faced any challenge. He would want us all to honor him through our service to others, our pursuit of adventure, and our laughter.
Ian is survived by his wife, Bowdie and their children, Abigail, Calvin, and Ella of Great Falls, Montana; his mother and father, Anne and Bill McBeth of Wray, CO; his brother, Rick and wife, Cindy and their children, Michael and Hannah of Wray, CO; his sister, Eleanor, and husband, Bob Alexander and their children, Jack and Maisie of Scottsdale, AZ; and his sister, Aislinn and husband, Chris Schultz of Eagle River, Alaska.
Funeral Services were held on Saturday, February 8, 2020, 2:00 p.m. at the Wray High School Gymnasium in Wray, Colorado with Jim Hoganson officiating. Interment will be held in the Grandview Cemetery in Wray, Colorado. Memorials may be made to the Ian McBeth Memorial Fund, c/o Wray State Bank, 300 Clay Street, P.O. Box 277, Wray, Colorado 80758. Schmidt-Jones Funeral Home is in charge of arrangements.