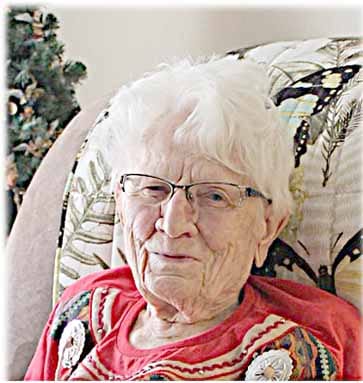 Gladys Darlene Seifert was born on February 7, 1932, to Albert W. Allen and Stella May Green, the youngest of 11 children. She passed on May 28, 2021 at the age of 89.
Gladys graduated from Yuma High School in 1949. She started working with Mountain Bell Telephone as an operator in 1948 when she was only 16 years old. She became the Yuma Business Office Clerk in 1951 and retired in June 1978 with 30 years’ service. She married Gloyd Loyal Seifert on May 19, 1954. She was a member of the Yuma United Methodist Church for over 80 years and was a member of Eastern Star, serving as Yuma Worthy Matron in 1996-1997 and as a Page of the Grand Chapter in Denver in 1997. She earned her Private Pilot’s license in May 1951 and proudly flew with her husband in their own airplanes for many years. She and Gloyd farmed two irrigated quarters just north of Yuma until 1978. They spent over 20 years “sun birding” in Phoenix, Arizona.
She was preceded in death by her parents, siblings, husband, and stepson Gary Lane Seifert.
She is survived by her stepson Darrel Lynn Seifert and wife Jerilynn of Cheyenne, WY, and daughter-in-law, Cathy Seifert of Harrisburg, NC. Four step-grandchildren and five step-great grandchildren.