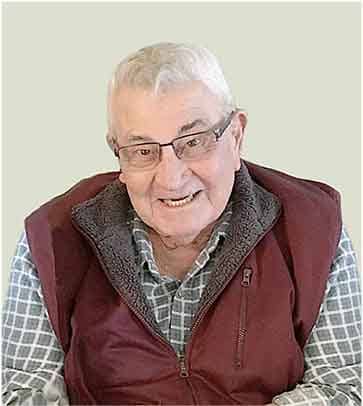 Keith R. Jones was born in December, 1935, in Stratton, Nebraska to Evan and Margaret Jones. He had one beloved sister, Donna Lee who was 12 ½ years older. Music was always a part of his life, with his mother being a teacher and singer (and a poet), sister Donna played clarinet and even performed with Glen Miller. Keith was a singer his whole life and often sang at church.
As a youngster, the family moved quite often as his father was a buyer for the Colorado Horse & Mule Company. They finally settled in northeastern Colorado, first near Laird, then in Wray, where they lived at the top of the hill near the cemetery and hand-built a stone fence that still stands today. Keith attended Wray High School, graduating in 1954.
He went to college in Sterling where he was the Empire Conference Heavy Weight Champion in wrestling. After college he partnered with his dad, buying and selling cattle and hogs. They bought and sold livestock in the same sale barn that his son, Kris now owns. Later, he enlisted in the armed service from 1958 to 1960 and then joined the National Guard where he boxed and wrestled with very good records in both sports.
In early 1960, at a dance in Eckley, he saw a spitfire of a woman that would soon become the love of his life. He and Sharon, his “Sweet Pea”, were married February 6th of that year and had 50 years of ups, downs, adventures and shenanigans together. After they got married, Keith worked hard in the oilfields in Wyoming and had experiences that would make some of the great stories he’d tell for the rest of his life. They moved back to Yuma and soon two children blessed their home – Kris in 1966, and Daniele in 1970.
Always involved in his community and sports, Keith joined the fire department in 1968 and retired after 20 years of volunteer service. He and Sharon competed in the weekly fire drills and yearly state competitions. He played softball, bowled and golfed. Keith became a Mason in 1991. He also sang and was active in the Southern Baptist Church and later, the Nazarene Church.
Throughout his life he had many interesting jobs including a water well drilling company, his own air conditioner installation company and other jobs in the community. Later, he worked at CO-OP and retired from there in 2000.
Keith was a creative thinker and a tinkerer, singer, writer, and story teller. He built several model windmills from scratch, among other things. Later in life there were few things he enjoyed more than the daily visits with his buddies where they sat around “and lied to each other.” All his friends were best friends, he served as “second dad” to a chosen few and was adored by his kids, grandkids and great-grandkids. He passed on at home surrounded by loved ones.
Keith is survived by son Kris Jones and girlfriend Dana Sitzman of Wray, grandchildren, Heather Perrin, Lindsey Pletcher; daughter Daniele Jones and boyfriend Joe Camblin of McKinney, TX, honorary granddaughter Ashley Toole; former daughter-in-law Laurie Jones of Wray, and grandchildren Megan Harrel and Ben Jones; niece Robyn Jeffords; 6 great-grandsons and 4 great-nephews. The last years of Keith’s life were very happy and greatly enriched by girlfriend Karen McCasland of Yuma.
He was preceded in death by wife Sharon; his parents Evan and Margaret Jones; sister and brother-in-law Donna and Orton Saxton; and parents-in-law Edward and Pauline Duncan.