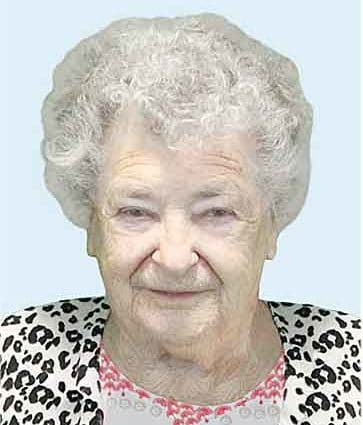 Lila May (Cecil) Simpson was born April 22nd, 1931 to Harry (Hack) Lee Cecil and Elsie Margaret (Gearhart) Cecil and passed away from a massive heart attack and stroke on June 22nd, in Yuma, Colorado at the age of 89.
She attended the first few years of elementary at a country school near their home. She and her brothers rode their horses to school. When her brother, Lee, was able to drive, he took them to Cope for school where she graduated from High School in 1949. She had wanted to be a Cosmetologist but could not tolerate the hair spray. She then attended Colorado A & M College (aka CSU) for 1 year majoring in Home Economics. She met Harold over the summer break and did not go back to College.
Lila and Harold Grant Simpson married on June 7th, 1951at Cope, Colorado and resided on their ranch in Cope for many years. To this union were born 3 daughters; Mary Lou, Connie and Shirley.
She was a true patriot and was very proud of her father, Hack Cecil, who fought in WWI, her brothers; Edward, Jack and Lee and her husband, Harold, who fought in WWII and her brother, Lloyd, who fought in the Korean War.
Lila was a Great Lady and a wonderful Mom. Connie, Shirley and Mary Lou were blessed. Her children never wanted to disappoint her. Actually they never had much time to get into mischief so that helped. Lila was an accomplished Rancher. She was also a great cook, seamstress and gardener. She could cook a 3 course meal in 15 minutes and made the best candy to share with her family and friends at Christmas. Lila also crocheted, quilted and embroidered many special gifts for family and friends. All her grandchildren and great grandchildren received a special blanket made by Grandma Lila. Her faith was very strong. One of her favorite activities was talking. She always had time to visit and lend a loving ear.
She was preceded in Death by her parents, Hack and Elsie Cecil, her husband, Harold, her brothers and sisters-in-law; Marvin, Lee and Linanel, Jack and Judy, Lloyd and Edward.
She is survived by her 3 daughters and sons-in-law; Mary Lou and Blaine Zulkoski of Rhome, TX, Connie and Lanny Payne of Cope, CO and Shirley and Tim Sprouse of Yuma, CO, and sister-in-law, Ellen Cecil of Cope, CO.
Grandchildren; Dustin and Jodi Zulkoski of Rhome, TX, Heather and Chris Lark of Thompsons Station, TN, Kristin and Steve Kraft of Loveland, CO, Holly Sprouse, Kyle Sprouse and Cori Witte, Tyson and Tiffany Sprouse and Jordon Sprouse all of Yuma, CO, Tyler Beckstrom of Cope, CO and Cody Beckstrom of Denver, CO.
Great Grandchildren; Chance Lark and Makenna, Zoe Lark, Skylar Lark, Samantha and Billy Carr, Lanae Kraft and Brandon, Kalysta Kraft, Destiny Edgar, Damon Edgar, Aislynn Boese, Natalie, Cooper and Alia Sprouse, Nick and Breann Witte, Great – Great Granddaughter, Sloan Nova Lark.
Lila also had a host of cousins, nieces and nephews and friends
Funeral Services were held at Baucke Funeral Home in Yuma, CO on Friday, June 26th at 10:30 a.m. Grave side services were held at the Otis cemetery.