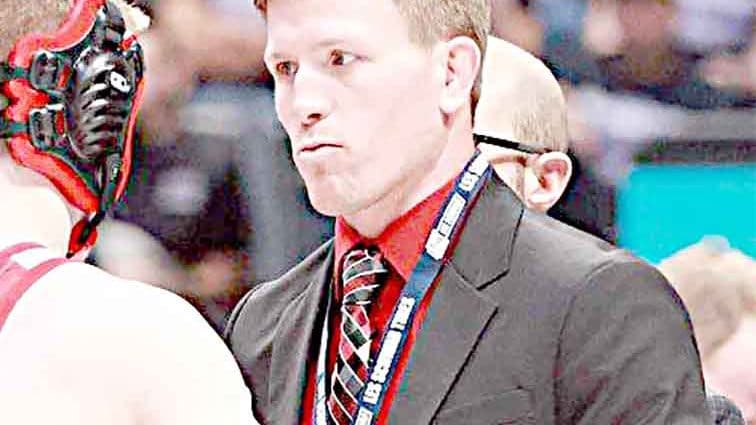 Yuma High School wrestling soon will be under new management.
Sort of.
Kyle Newton has been a key coach in the program for the past four years.
The only difference is everything stops with him now.
“I’m really excited, I can’t stop thinking about it,” he said earlier this week. “I don’t think it will change the amount of work I put in, but actually being the head coach is pretty exciting.”

Newton being the new head wrestling coach still requires the Yuma-1 Board of Education approval later this month. However, YHS Activities Director Michael Dischner announced him as the new face of YHS wrestling late last week on Facebook, and there does not seem to be any impediments to Newton’s final approval.
“Replacing a Rory Lynch is no easy task,” Dischner said in an email. “Rory and Kyle worked so well together the past two seasons since I’ve been at YHS. Kyle was an exciting hire for the committee as his passion and commitment to YHS wrestling was evident in his interview. He was so excited about this opportunity and extremely motivated to get his methods and techniques rolling from youth programs all the way up to the high school level. Kyle relates so well to our athletes and is going to fit in with a staff of coaches that I’m really proud of.”
Newton spent his early years in the Yuma area, then moved to Pueblo around kindergarten age. He and his twin brother Brandon grew up in the Steel City, wrestling at Pueblo West in their first three years of high school, then finishing at Pueblo Central their senior year.
Wrestling at the Class 4A level, the Newton twins reached state each of their four years in high school, but Kyle said they never could break through into the medal rounds.
“In a school like Yuma I think it’s best to do multiple sports, but we got to wrestle year round there,” he said. “I was really passionate about it, still am.”
However, he also noted there can be too much of a good thing.
“I don’t regret it because I’m a better coach because of my experience,” he said. “I know what not to do, and how not to burn out at state. I want to make it fun, so when we’re at state we’re still just wrestling and having fun.”
The Newton brothers went to CSU-Pueblo after high school, where they practiced with the wrestling team, but left school before the season. Still, Kyle said it was a valuable experience to him; he just decided college was not for him and thought it was best not to waste money on something he wasn’t interested in.
However, he still definitely was interested in wrestling. He and his brother ended up moving back to their childhood hometown, working with the family farm and ranch operation. Kyle said they got back into wrestling helping the local crew about eight years ago. Kyle helped Thomas Holtorf with the junior high program for two years, “then Rory called when he took the (YHS) job.”
He has spent the past four years as the top assistant to Lynch at the high school. Kyle did much of the practice planning, while Rory handled the administrative duties that come with being a head coach. Lynch, who resigned after this past season, never shied away from the fact Newton was a big part of the program’s direction, and voiced hope Newton would succeed him.
Newton said he expects the staff to mostly stay in place for next season, including his brother Brandon, who took a back seat in recent years while building his cattle herd, along with CJ Leonhardt and Tyler Korf. The latter two are YHS graduates, and state placers, Leonhardt placing third at state, and Korf being Yuma’s last state champion, in 2011.

“The only one we’ll be missing is Rory, but hopefully he will stay involved somehow because we and the kids all really like him.
“At first I was a little nervous (about being head coach). Doing practices and showing moves is the easiest part. It’s the head coaching stuff that is tough, but I’ve been with Rory enough now, and he’s shown me what to do, that I know I can handle it.”
YHS wrestling has been fairly successful in recent seasons, qualifying eight for the state tournament each of the past two seasons, finishing in the top 20 at state this past season with two placers, and bringing nearly all of the team back next season.
However, Newton said he realizes the key to having sustained success lies with getting the seed planted at the grassroots level.
“Hopefully, we’ll just keep it going,” he said. “I want to put a lot of time pee wee and junior high programs, so when they get to high school they are ready to go.”
As for this summer, Newton said he was still hoping to get the wrestlers to a tournament or two, but as of now that remained undetermined.