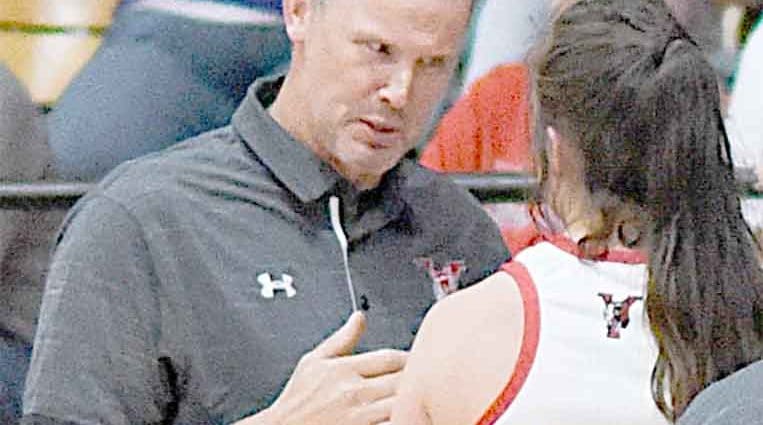 Robinson looks to keep it rolling with YHS girls hoops

It anything motivates Jeremy Robinson, it’s to keep the ball rolling for the Yuma High School girls basketball program.
“Yuma basketball is Yuma basketball,” he said earlier this week, “everyone is accustomed to a certain standard, and it’s super fun to be a part of. And it’s a great environment. I’ve seen a lot of places, and that Pit is one of the coolest I’ve been in, especially when you’re winning.”

Robinson accepted the girls head basketball coach job last week. His assignment still requires final approval from the Yuma-1 Board of Education, later this month at its regular meeting. However, YHS Activities Director Michael Dischner announced Robinson’s acceptance late last week on Facebook, pending board approval.
Robinson has been a volunteer coach the past four seasons on coach Bob Rahm’s staff. Rahm, a YHS alum, announced his retirement earlier this spring after a long and illustrious coaching career for the boys and girls.
“Talk about having shoes to fill. Bob Rahm has been a face in Yuma basketball for over 20 years with a lot of success as a direct result of him,” Dischner said in an email. “Jeremy is a guy that our hiring committee felt filled those shoes as close as we could. Jeremy was an extremely exciting hire for me as our talks surrounding X’s and O’s were often tied to hard work and accountability. Kids are going to be expected to work hard and do things the right way. I’m excited to watch him get going.”
Robinson said he first considered applying for the head job four years ago, but the timing was not right for his family.
However, he said he definitely was interested when he heard Rahm was stepping down. His one consideration, though, was he would have a tougher time attending of his daughter Cody’s basketball games with Black Hills State University. As a volunteer coach the last four years, including Cody’s recently-completed freshman season, allowed him to miss some Yuma games to go watch her.
“Now I can’t just go,” he said. “We sat down as a family, and Cody was all for it.
“I love coaching and helping the kids learn basketball,” Robinson said. “I enjoy doing it, but the timing had to be right.”
A key factor is all of Cody’s games are streamed over the internet and archived, so he can always watch a game.
Robinson, a farrier who stays plenty busy shoeing horses throughout the region, grew up in Loveland, and was a star player at Thompson Valley High School, graduating in 1992. He then played basketball at Chadron State College, graduating from there in 1996. He enjoyed a stellar career at Chadron State, and was inducted into the college’s Hall of Fame in 2012. He remains in the top 10 in rebounding and scoring in the program’s history. (His brothers also played at Chadron State, with one still the all-time leading scorer, and the other still in the top 10 in scoring.)
He and his wife Jamie, a math teacher and assistant volleyball coach at YHS, moved to a rural residence near Vona a couple of decades ago, where they have raised their three children — Cody, son Clay, an incoming junior at YHS, and Caddis, an incoming freshman.
Robinson was the girls head basketball coach at Liberty for 13 years.
“We always had a good team, but Haxtun would come into our district and it seems like we would always run into them,” he said.
He took one year off from coaching, then served as an assistant coach for three years when Liberty and Stratton began a sports co-op last decade. The Knighted Eagles took third in Class 1A in the third year.
It was the next year that Cody came to Yuma as a freshman, and Jamie joined the teaching staff. Rahm took over from Mike Neill the next season, and Robinson spent the last four seasons as a volunteer coach. The Indians had two state championships, and one third-place finish during that span.
Robinson’s whole coaching career has been with girls’ teams. He said it has just worked out that way because that was the coaching job that was open at Liberty. “It was our first year there and I was asked to coach the girls,” he said. “I enjoy it.”
“It seems if you ask a girls to try a different move, or something else different, they are just more willing to try it.

The Yuma coaching staff will remain intact as Robinson said assistants Kellie Seward, Liz Karabelle and Justin Coughlin all have agreed to stay on board, the only different being Robinson in the top spot.
“It’s a different role for me than what they’re used to, but I think they’ll handle it,” he said of the players.
“I want to get them to enjoy basketball,” he added. “That’s my No. 1 goal. You throw winning on top of that and it becomes even more fun.”
Nearly everyone returns from last season’s squad. The only question now is if everyone can at least get into the gym this summer to get acclimated to Robinson’s new system, instead of having to go through that whole process when preseason practice begins in November.
“This is definitely an interesting time,” Robinson said. “Just getting in the gym is all I care about this summer.”