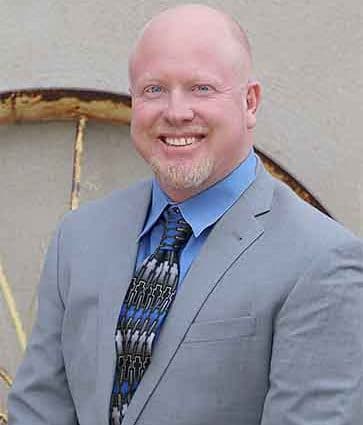 Ray Prentice has decided to run for the seat of Yuma County Commissioner in District 3 in 2020.
He is running as a Republican. He is joined in the race for the District 3 seat by incumbent Robin Wiley, also a Republican, as well as Philip Riggelman, who is running unaffiliated.

Prentice was born and primarily raised in Yuma County. His family has a long history in Yuma County, with the first Prentices arriving in the 1890’s. He grew up working for farmers in the area, including helping his grandfather Gerald Prentice. He graduated from Wray High School in 1995. He is a veteran of the Colorado Army National Guard. He has previously worked in law enforcement and is currently working as a foreman for Foundation Energy in Wray. He is married to Robin Prentice and has three daughters who attend school in Idalia.
His vision for the future of Yuma County is one where businesses are attracted to come and expand in our area.
“We have so much going for us in Yuma County,” he said in his announcement release. “We have a major north to south corridor as well as easy access to I-70 and I-76. We need to show how our placement can be an advantage to companies who are looking for a place to build, as well as being in the economic development zone.”
Prentice said he also wants to see an environment where small businesses from the local residents is allowed to flourish and grow. He feels that fiscal conservatism is the only way to build the county without causing greater harm than good. The continued struggles that local gas companies face will have to be balanced out with new business coming in.
One of his top priorities will be seeing what creative ways we can come up with to address our declining road quality.
“We have some great people working for this county,” he said, “we just need to find the way that they can do their jobs in better ways. We also need to find ways to get the raw materials to the area to fix the roads.”
Many have approached him about certain roads that have become dangerous to travel in the area. Large holes and lack of gravel create big problems to find solutions to.
Water issues continue to be a problem that this county needs to address. “We must innovate and find ways to stretch this resource so farmers can continue to grow their crops, and towns and those in the county will still have water to their houses, as well as covering our contractual obligations to Kansas and Nebraska.”
This is not an easy task and will take much creativity and planning to make it possible, he added.
Ray has been on the Beecher Island Memorial Board for the last two years, helping oversee and plan the large 150th anniversary celebration in 2018. He is also the current commander of the local Johnny Heins Post 30 of the American Legion, as well as the senior vice commander of the district. He has served on the Vets Club board. He has also brought in several concerts to the area, hosting them in the Wray amphitheater when possible. You can find him on Facebook at https://www.facebook.com/Ray-Prentice-for-Yuma-County-Commissioner-District-3 or you can call him at (970)-630-9309. You can also email him at rprentice4ycc@gmail.com.