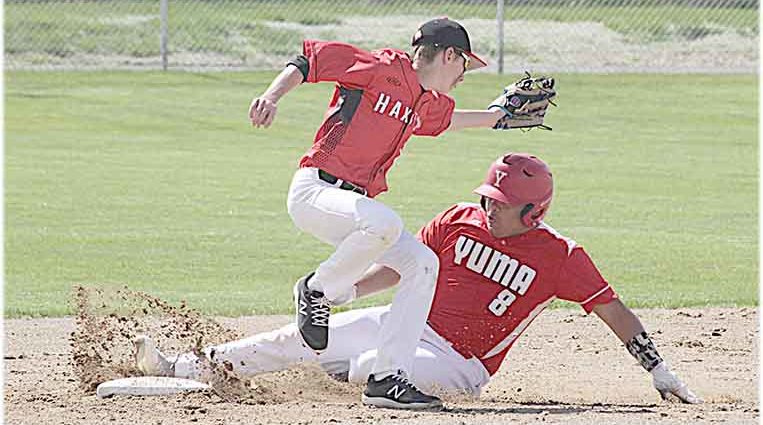 Yuma has played its first five games away from the friendly confines of Tribe Field, going 2-3 in the process. The Indians hit the road again Tuesday when they travel to Limon for a single varsity game, but then play three double dips back at Tribe Field before closing out the regular season at rival Wray.
That means nine of the Indians’ final 10 games are in Yuma County, and they have plenty of work to do after a rough recent stretch.
After seeing a 5-3 lead turn into a 6-5 loss at Caliche two Saturdays ago, the Indians dropped a 6-1 decision at Haxtun last Thursday.
Their defense had been mostly solid, as well as the pitching for the most part, but could not get the bats going.
However, it all went bad Monday in an LPAA game at Merino, losing 15-5.
Pitching, defense, lack of offense, it all reared its ugly head at Merino.
Yuma first went to Haxtun looking to get back on the winning track after the Caliche loss.
It looked promising early as Kobe Rayl and John Smith led off with walks. However, the Indians could get only one run as Rayl scored on an error.
It stayed 1-0 as lefty Conner Lynch twirled three scoreless innings.
However, Haxtun finally got to him with two runs on two hits in the bottom of the fourth for a 2-1 lead. They then got to relieve Yahir Trejo for four runs off of four more hits in the fifth for a 6-1 lead.

Yuma ended up striking out 11 times while managing just two hits, both courtesy of Kevin Hermosillo. Five Indians struck out twice. Defensively, the Indians committed only one error.
Lynch took the hard-luck pitching loss despite striking out six and walking only one over four innings, allowing two earned runs on two hits.
The defense took a big hit in the 15-5 loss at Merino, Monday afternoon.
The Rams jumped on Yuma in the first inning with five runs off of just two singles, errors and walks playing a big role in the rally.
Trailing 6-1, the Indians briefly made it interesting with a four-run third. John Smith led off with a walk, followed by a single by Trejo. Smith scored on Jose Ruiz’s double, Andre Baucke’s single drove in Trejo, and Ruiz scored on Victor Perez’s double. Baucke also scored during the rally, pulling Yuma to within one, 6-5.
However, Merino answered with four runs of its own in the home half, then added another four in the fourth. The Rams tacked on the 15th run in the fifth to get the game called on the 10-run rule.
The Indians did show some life offensively, recording eight hits, including two doubles. Ruiz had two hits with a double, one RBI and one run, Trejo two hits and one run, Baucke two hits, one RBI and one run, Perez a double, one RBI and one run, Cade Morton one hit and one RBI, Smith one run, and Hermosillo one RBI. Trejo went the first 2-1/3 innings on the hill to take the loss. Smith and Lynch also pitched.
Merino had only one more hit than Yuma, nine, but also drew eight walks compared to four for Yuma, and the Rams did not commit a single error while Yuma had seven.

JV BASEBALL
Yuma High School’s JV baseball team dropped a 10-8 decision in three innings at Haxtun, last Thursday.
The Indians trailed 4-3 when they scored five runs in the top of the third for an 8-4 lead. However, Haxtun responded with six runs in the home half to pull out the win.
Kevin Hermosillo hit a double, with one RBI and one run, Hugo Montes one hit and one run, Bridger Lynch one hit and two runs, Nathan Etl one hit, Trey Stegman two runs, Carson Lynch one RBI, and Jake Hagemeier and Pablo Becerra one run each.