Yuma High School’s cross country teams will get to showcase their talents on the local stage for once, as they will be hosting the YHS Cross Country Twilight Meet on Friday at Indian Hills Golf Course.
YHS hosted a regular season meet and one regional at Indian Hills a few years ago, but in most years do not have home meets.

However, an opportunity arose when it was announced by CHSAA that cross country would be able to proceed this “fall,” though with restrictions in the number of runners allowed. The season also was shortened.
That opened the door for YHS to help fill its cross country schedule by hosting its own meet.
Joining the Yuma runners at Indian Hills will be runners from Wiggins, Heritage Christian, Rocky Mountain Lutheran, Merino, Shining Mountain Waldorf, Wray and Fort Morgan.
The girls race begins at 6 p.m., followed by the boys at 6:40. 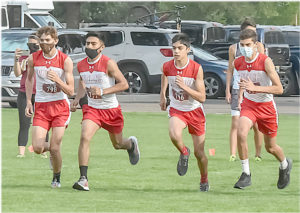 YHS Athletic Director Michael Dischner explained why the Yuma meet has a later starting time than most weekday cross country meets. He said meets the Yuma runners have attended in recent years on the corresponding week have seen the races shortened due to heat, so the decision to start later.
“(It) helps get some quality teams from up west out here too,” he added.
Based on what the YHS runners have accomplished in the first two meets, the Indians have a chance at a great showing in their home meet.
Both teams had strong efforts again last Saturday in the Andy Myers Invitational, hosted by Greeley West at Monfort Park.
Senior Shelby Blach, in her first year of cross country, won the girls race with a time of 22 minutes, 8.6 seconds.
Freshman Ashley Ibanez was close behind, placing fourth in 22:36.9.
Sophomore Hailey Eyring was right there also, finishing sixth in 23:17.9. Junior Samantha Wells was 16th in 26:23.7, sophomore Nuyia Vega 25th in 27:56.4,, and freshman Caddis Robinson 31st in 29:04.9.
The girls finished second in the team standings with 40 points. Northridge won the girls team title with 34, while Wiggins was third with 80. Greeley West fourth with 85, and Greeley Central fifth with 100.
Runners from Riverdal Ridge, and Shining Mountain Waldorf also competed.
Freshman Angel Escobar led the way in another strong showing by the boys team, placing eighth in 18:47.7.
Sophomore Javier Duran was 13th in 19:17.9.
Junior Jaxson Lungwitz was 14th with a time of 19:32.4
Sophomore Jesus Ross placed 17th in 19:53.7, senior Blaze Brophy 34th in 21:41.5, junior Yahir Trejo 45th in 23:26.7, and freshman Ruben Vega 47th in 23:47.1.
The boys finished fourth in the team standings with 85 points. Riverdale Ridge won the boys title with 62 points, while Greeley West was second with 75, Northridge third with 83, Greeley Central fifth with 88, Severance sixth with 120, and Wiggins seventh with 136.